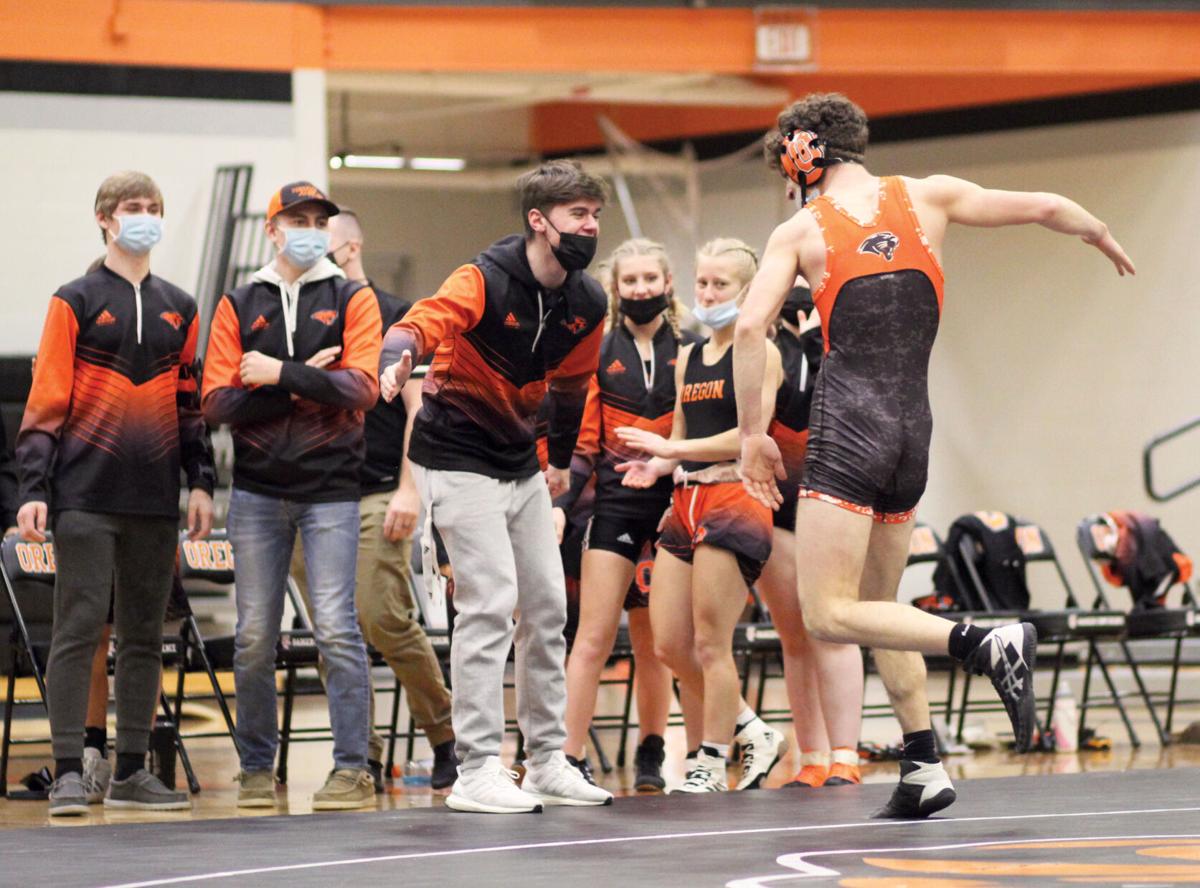 Oregon's John Ruth (right) heads over to the bench following his win at 160 pounds during the Panthers’ 40-36 Badger West Conference dual win over Sauk Prairie on Thursday, Jan. 6, at Oregon High School. 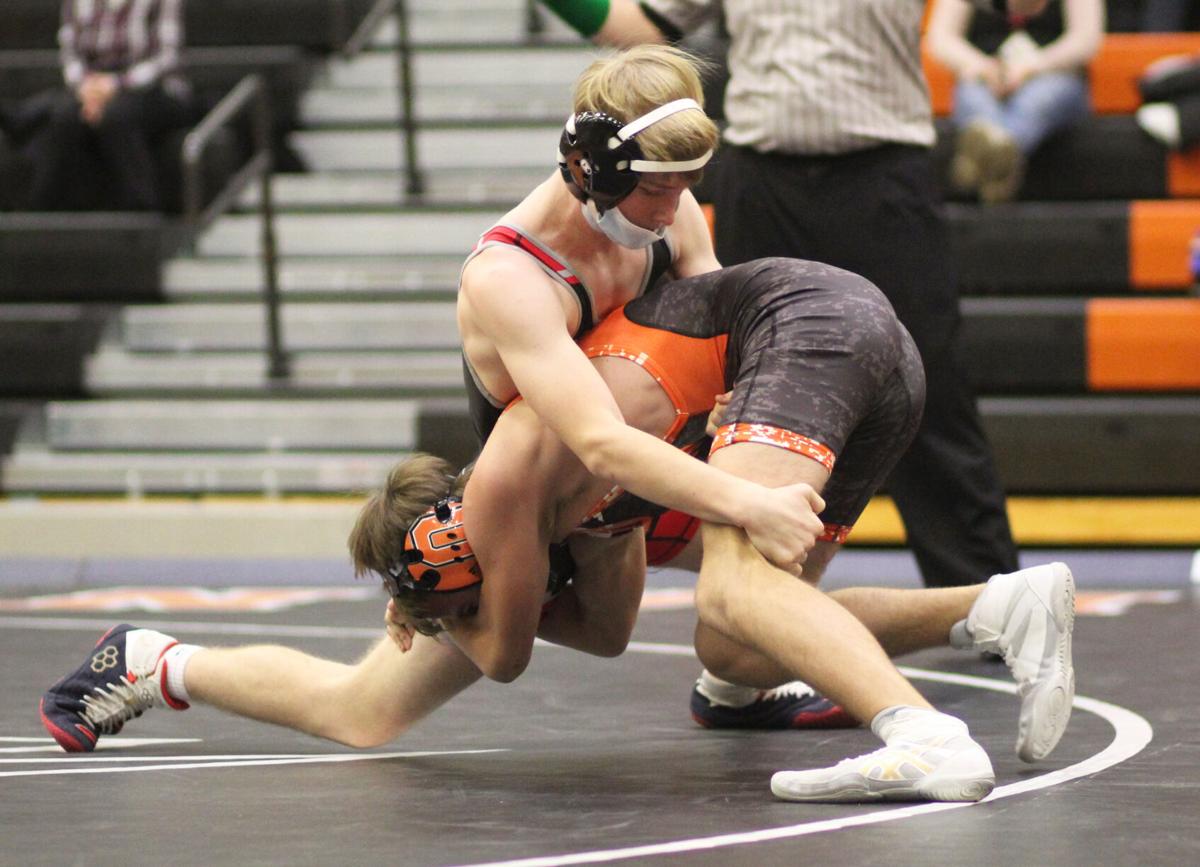 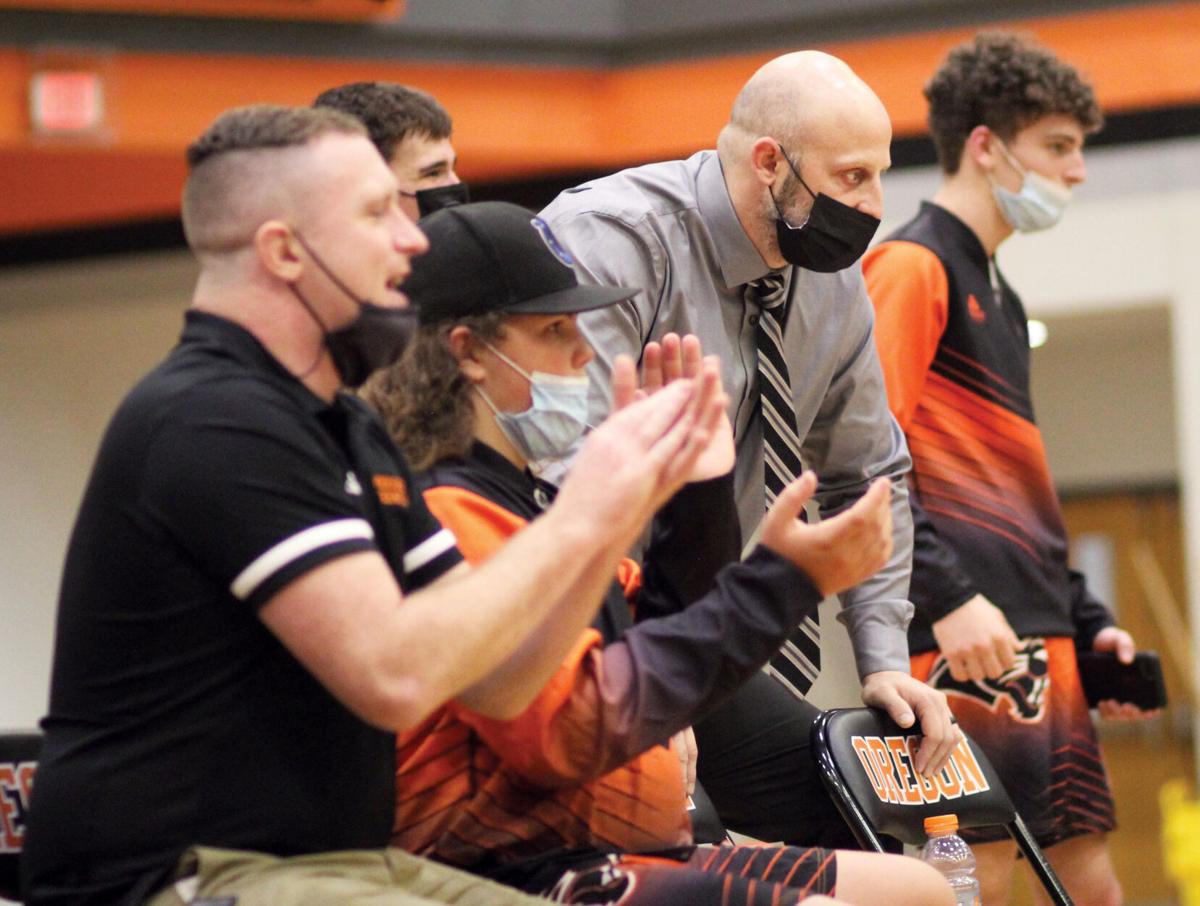 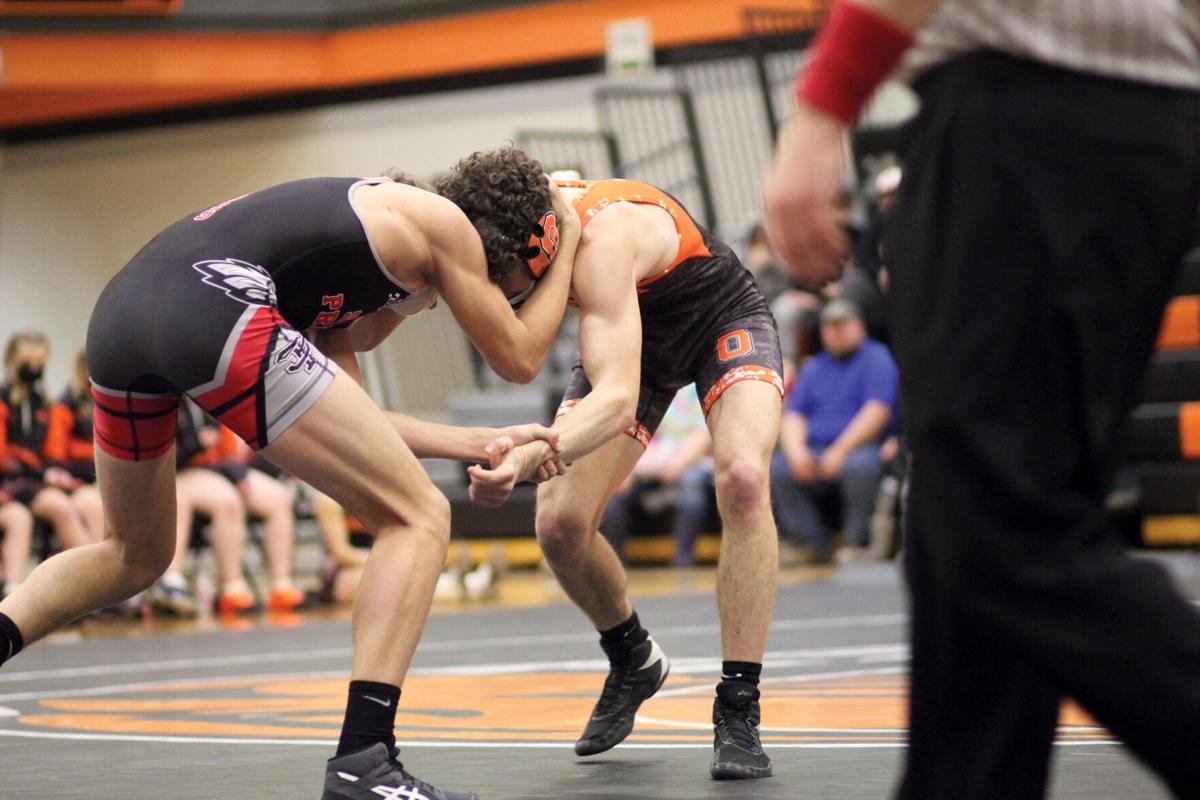 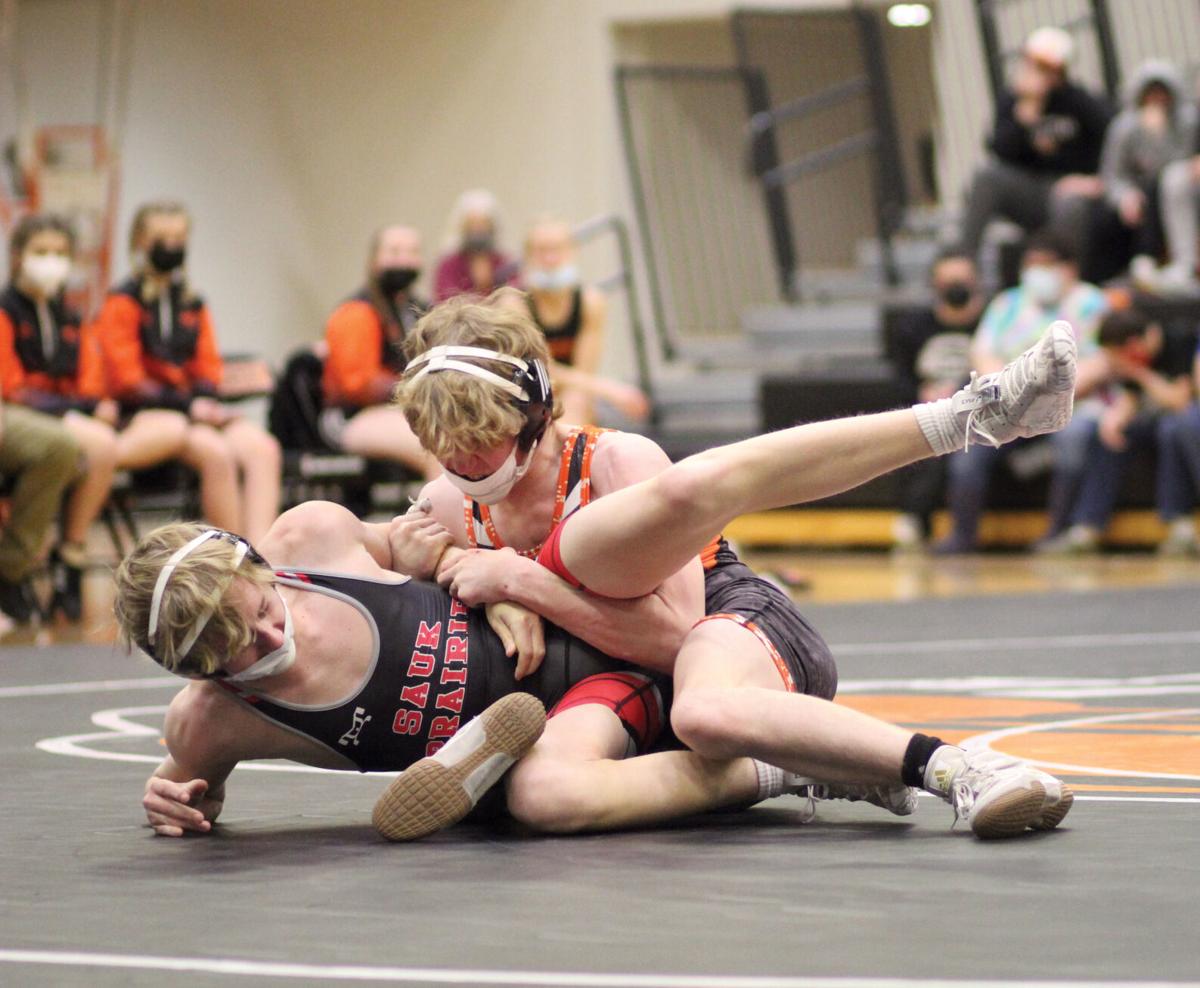 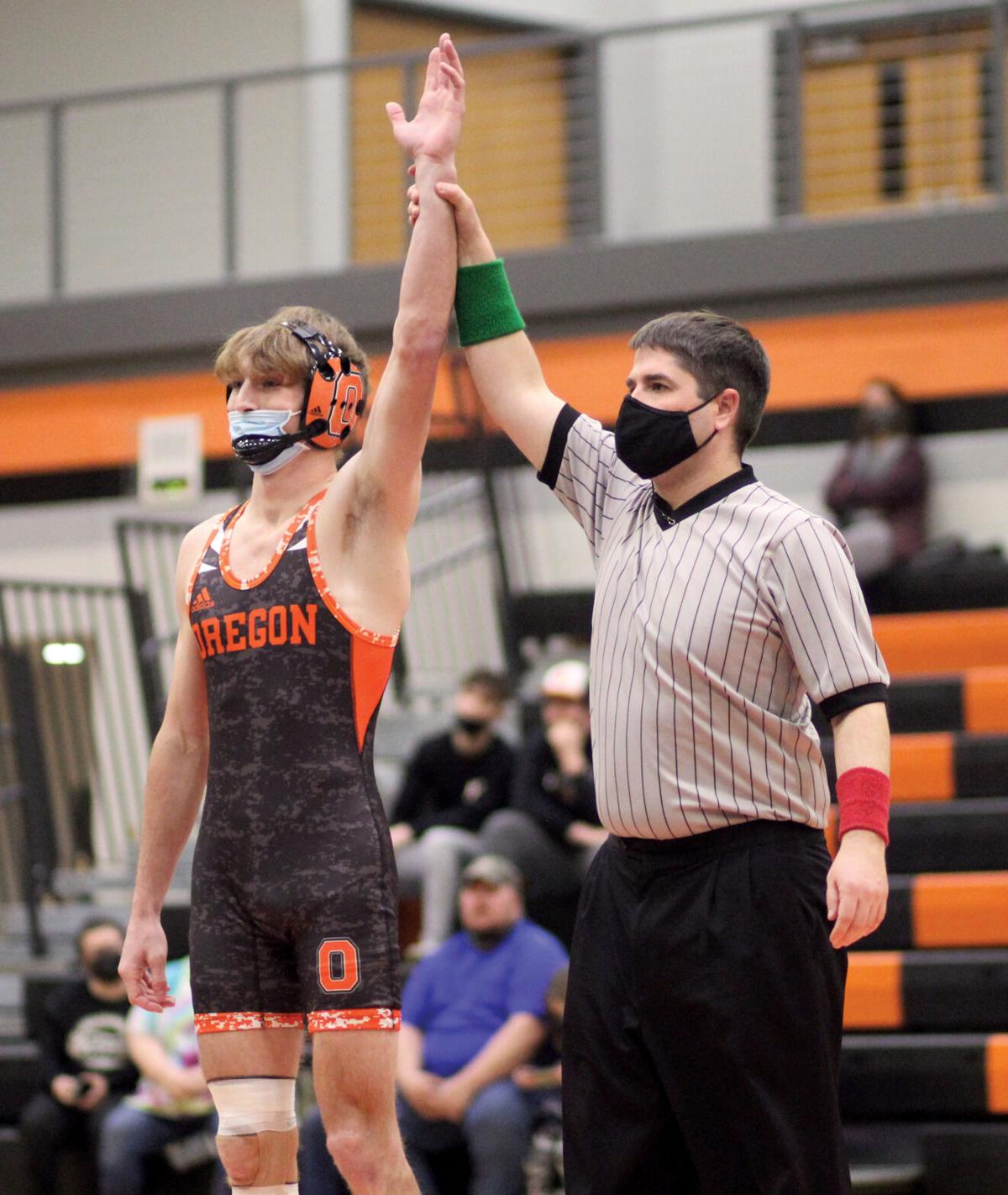 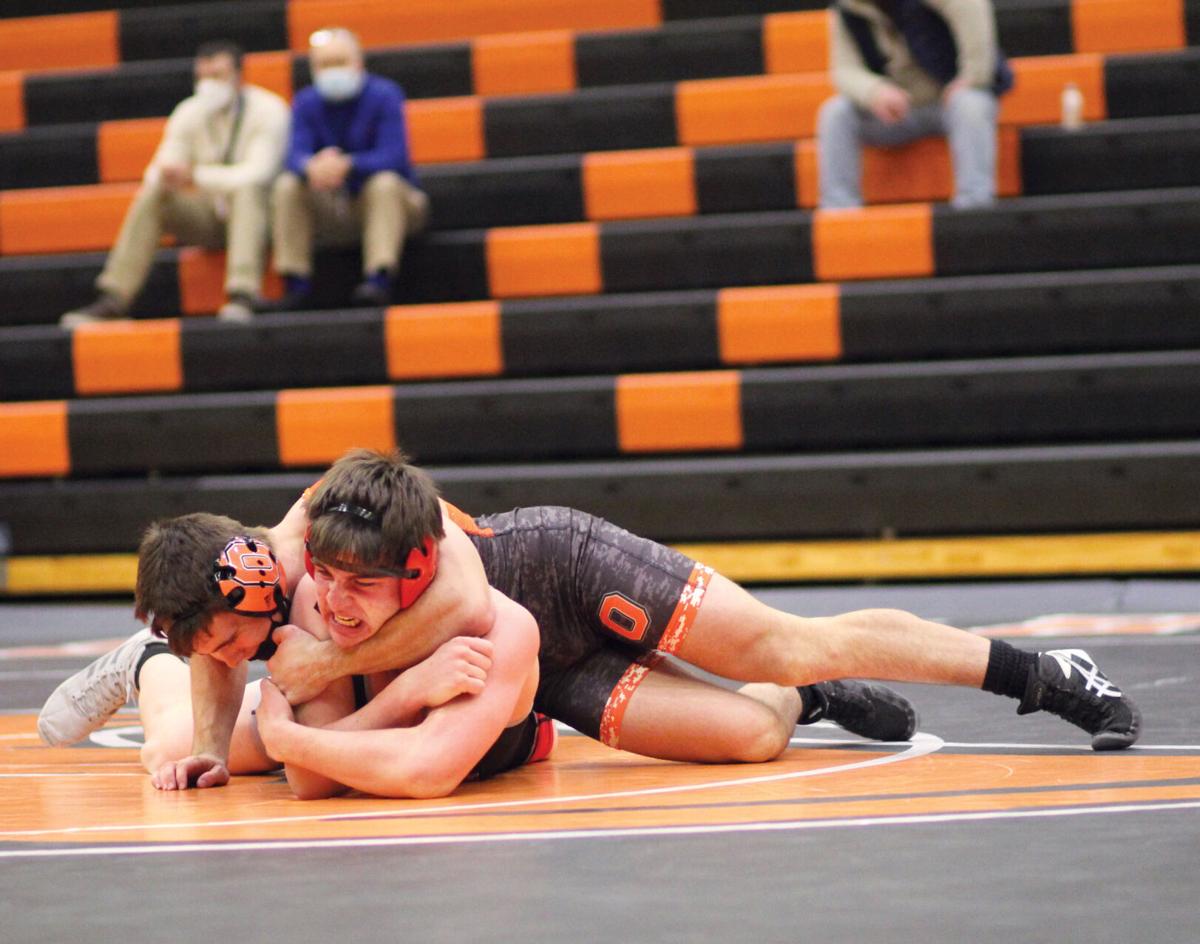 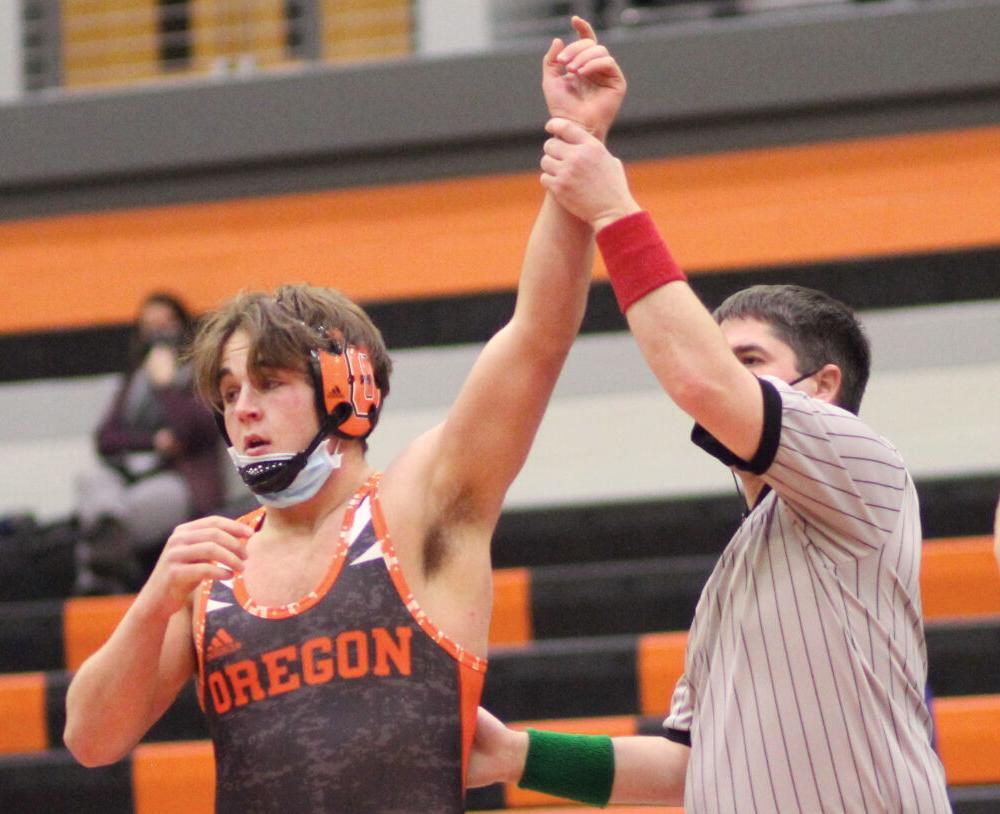 Oregon's Tyler Wald gets his hand raised after a 195-pound bout during the Panthers’ 40-36 Badger West Conference dual win over Sauk Prairie on Thursday, Jan. 6, at Oregon High School. 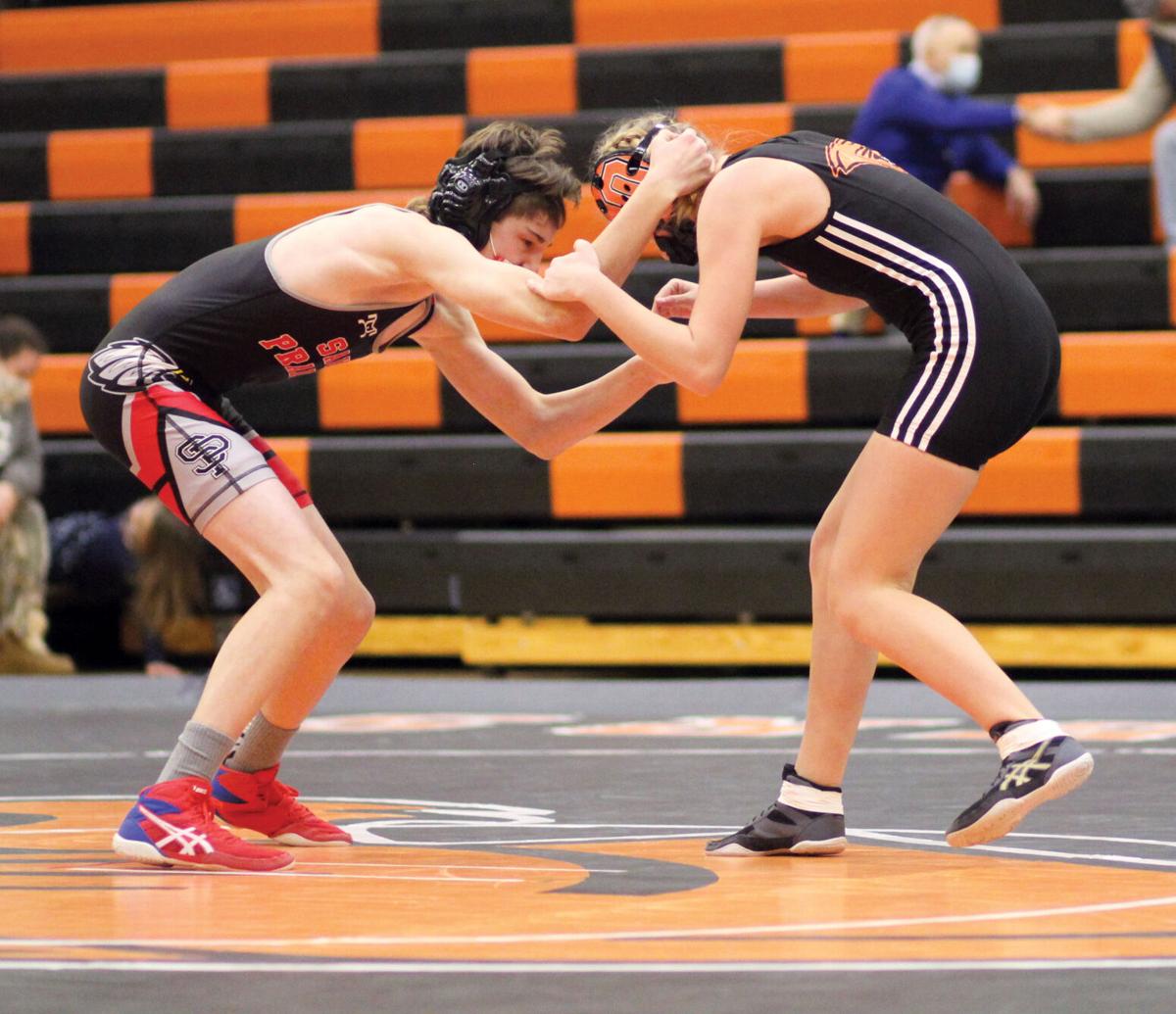 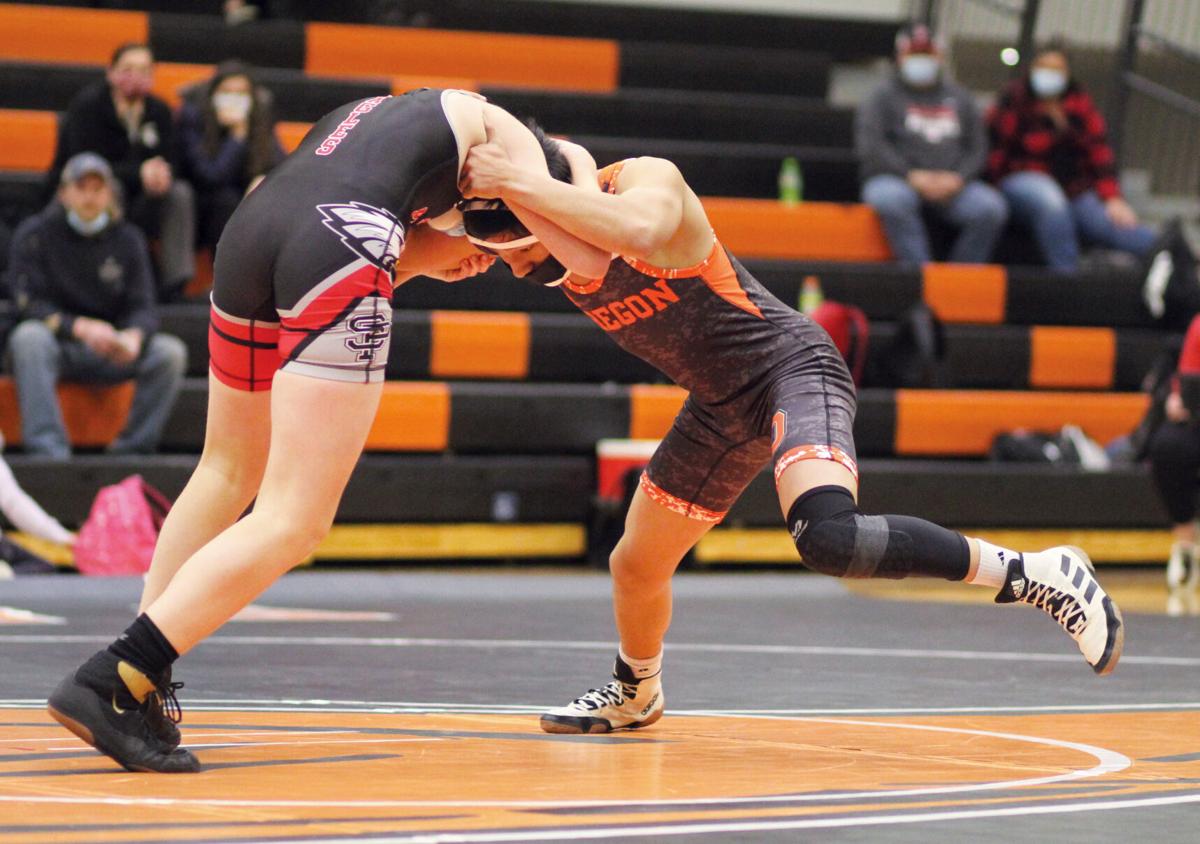 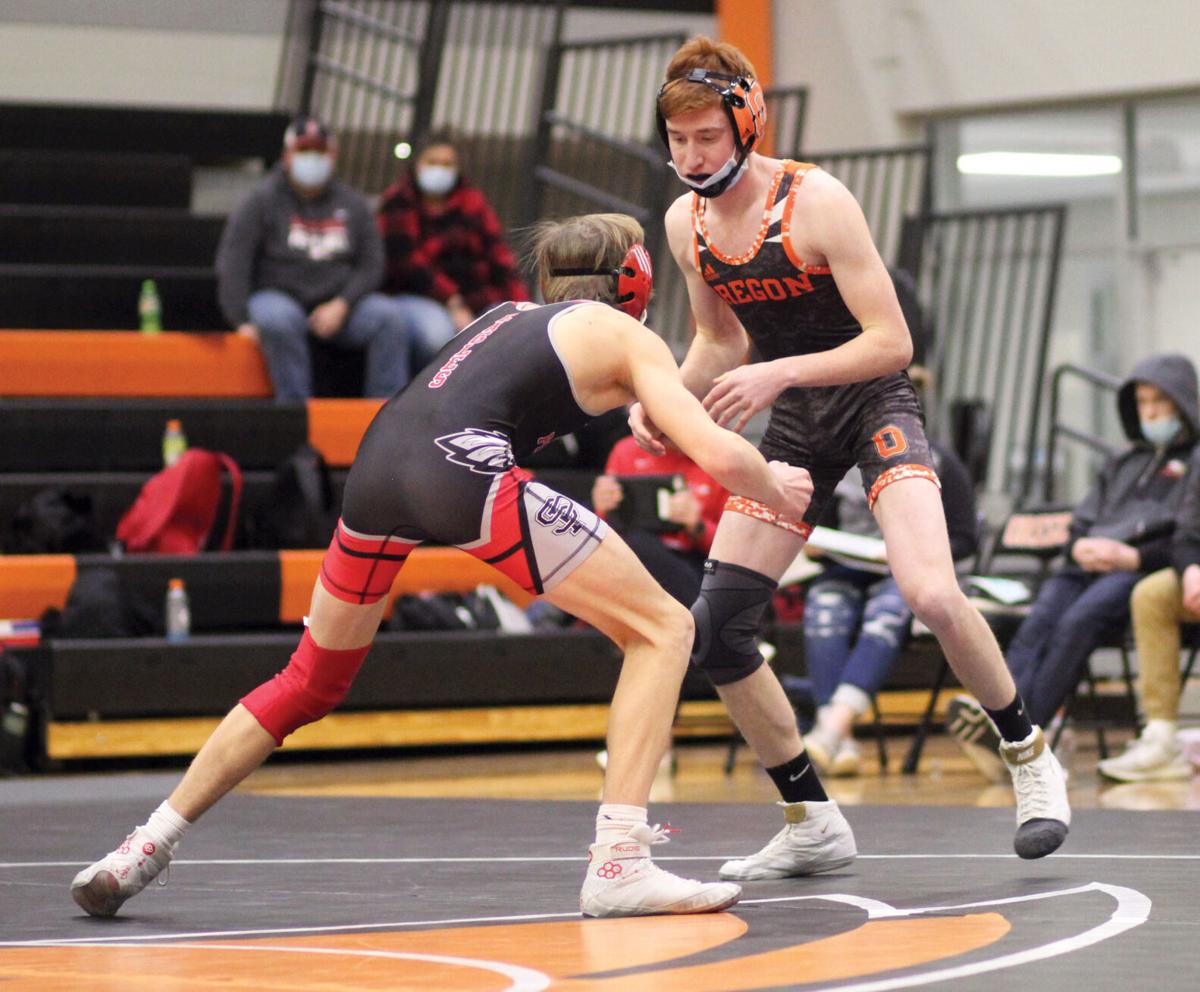 Oregon's John Ruth (right) heads over to the bench following his win at 160 pounds during the Panthers’ 40-36 Badger West Conference dual win over Sauk Prairie on Thursday, Jan. 6, at Oregon High School.

Oregon's Tyler Wald gets his hand raised after a 195-pound bout during the Panthers’ 40-36 Badger West Conference dual win over Sauk Prairie on Thursday, Jan. 6, at Oregon High School.

Pollock — a sophomore — was a JV callup competing at 120-pounds for Oregon on Thursday. He pinned Sauk freshman Chase Urban with 1 minute, 11 seconds left in the second period to extend the Panthers’ lead to 40-24 with two matches to go, mathematically putting it out of reach for the Eagles.

“He’s had a great JV season, that’s why I had a lot of confidence sending him out there,” Hookstead. “He does a lot of great things. He’s fairly new to wrestling, so for him to just have the confidence to go out there and do what he knows against a varsity kid is huge.”

Oregon collected four pins on its way to victory. It was only the Panthers’ second dual meet of the season. Oregon lost a Badger West dual to Reedsburg 45-33 on Dec. 3.

“We just wanted to wrestle competitively in every match,” Hookstead said. “I don’t think we ever slowed down.”

Hookstead started his coaching career with the Darlington Middle School wrestling team while he was attending the University of Wisconsin-Platteville. Hookstead helped out with the middle school team for two years before heading off to the high school where he coached the junior varsity team for four years.

Hookstead then got a teaching job at Oregon High School. He helped coach the Panther football team before joining the wrestling staff two years ago.

“It’s not only the first win of the season but the first win for coach Hookstead,” senior John Ruth said, who got a win at 160. “It’s definitely special for all of us.”

Junior Brandon Liddle continued his standout junior campaign with a pin with 33 seconds left in the first period in the 138-pound bout. With the win, Liddle moved to 9-2 on the season. A forfeit by Oregon (145) and Sauk Prairie (152) made it a 12-6 Panther lead.

Ruth grabbed a victory via pin with 12 seconds left in the 160-pound match against junior Grant Sorg to extend the advantage to 18-6.

The win drew quite the reaction from the Oregon bench. Hookstead said it was nice to see Ruth bounce back after not having the holiday tournament he wanted to have.

“He’s (Sorg) a tough wrestler, we felt pretty even,” Ruth said. “We got scrambling a lot. I felt that he started to feel the pressure and gave in under the pressure a little bit. He tried to hit a big move with high risk, high reward. I saw it coming and it didn’t work out for him.”

Senior Turner Sieren picked up a major 9-1 decision at 170 to give Oregon a 22-6 lead. After a double-forfeit at 182, junior Tyler Wald made quick work of Eddie Perez, pinning the Sauk freshman 15 seconds into the 195-pound bout.

“You gotta love it when you have a kid that wrestles 182, is going to get a forfeit and says, ‘can you bump me up to 195 so I can have a match,’” Hookstead said. “Stuff like that always impresses a coach.”

Sauk Prairie pins at 220 and 106 and an Oregon forfeit at 285 sandwiched in cut the deficit down to 28-24 for the Eagles. Freshman Tomas Neumann received a forfeit at 113 for the Panthers and then Pollock sealed the victory with his pin.

“I think it’s huge just to say you can stand across the mat from another team and say overall, we got guys that are just enough better than you,” Hookstead said. “Even if it’s just one match or one guy better.”