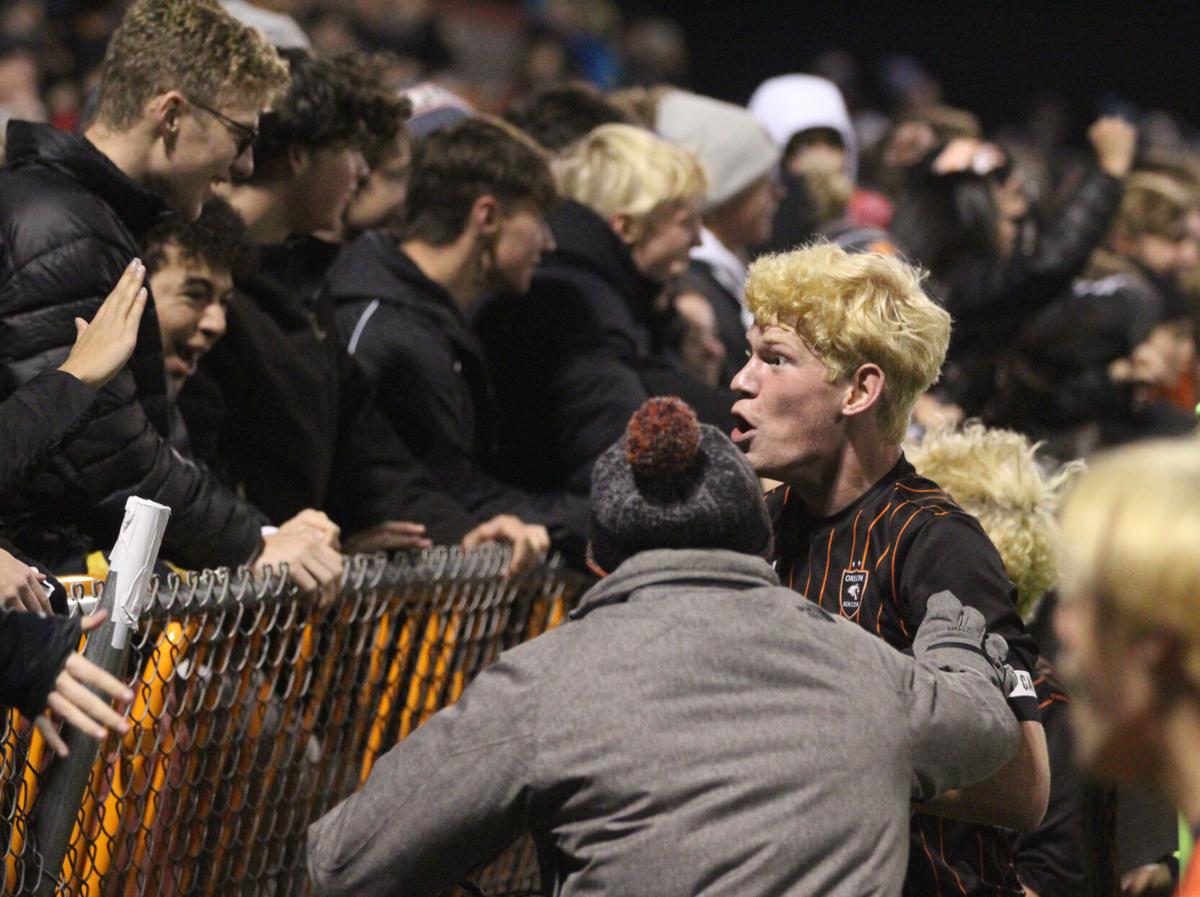 Oregon's Eli Lehmann celebrates with fans after the Panthers defeated Whitefish Bay 3-1 in the state final on Saturday, Nov. 6, at Uihlein Soccer Park in Milwaukee. 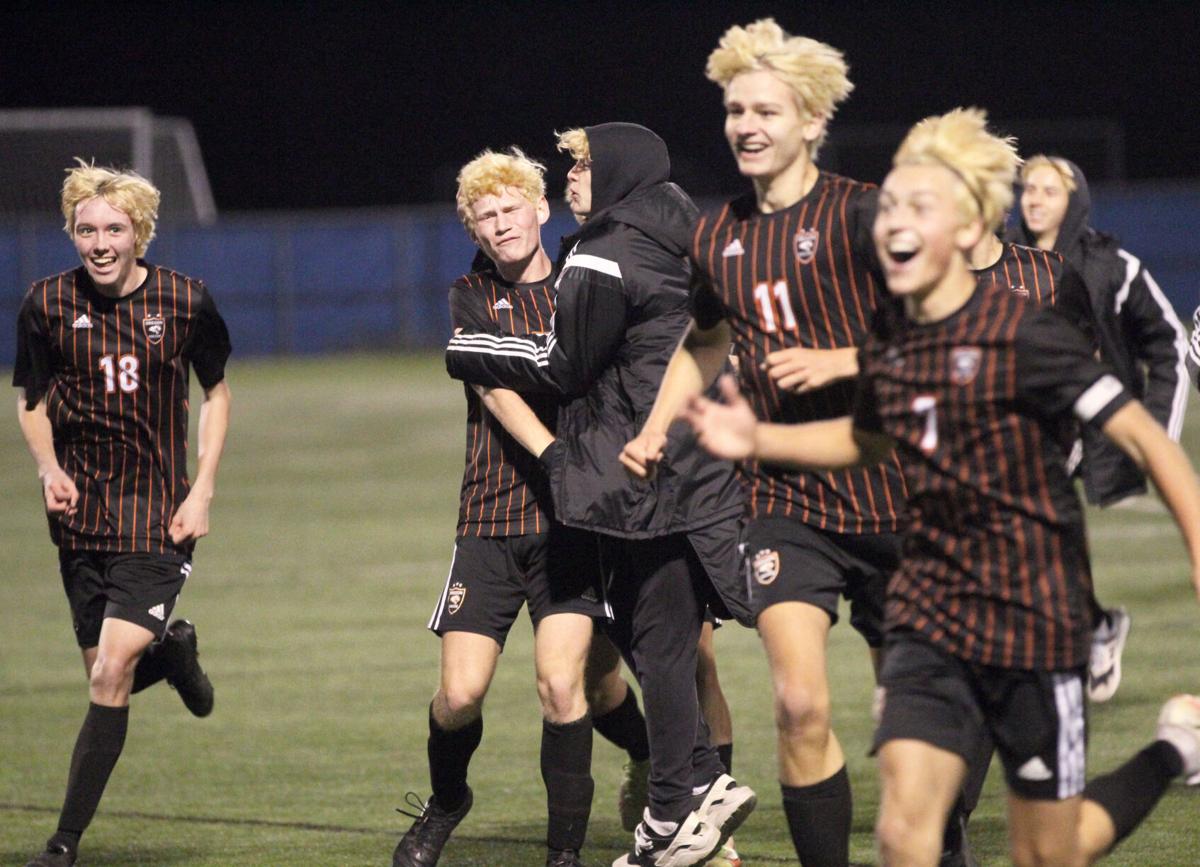 The Oregon boys soccer team runs to its fans after the Panthers defeated Whitefish Bay 3-1 in the final on Saturday, Nov. 6, at Uihlein Soccer Park in Milwaukee. 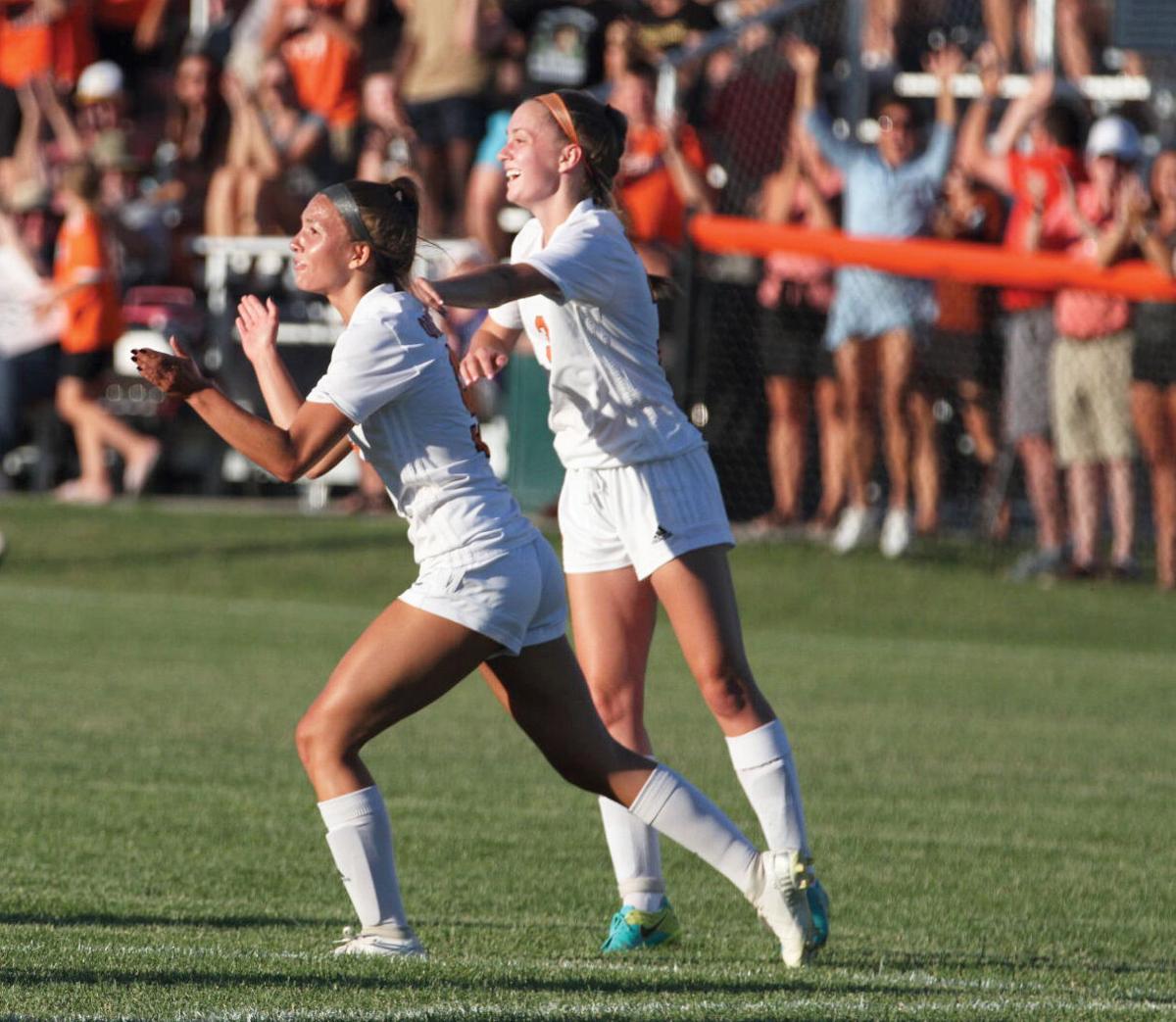 Oregon's Jaelyn Nedelcoff (left) and Brianna Sauer celebrate after Nedelcoff’s goal in the first half of a Division 2 sectional final game at Oregon High School on Saturday, June 19. 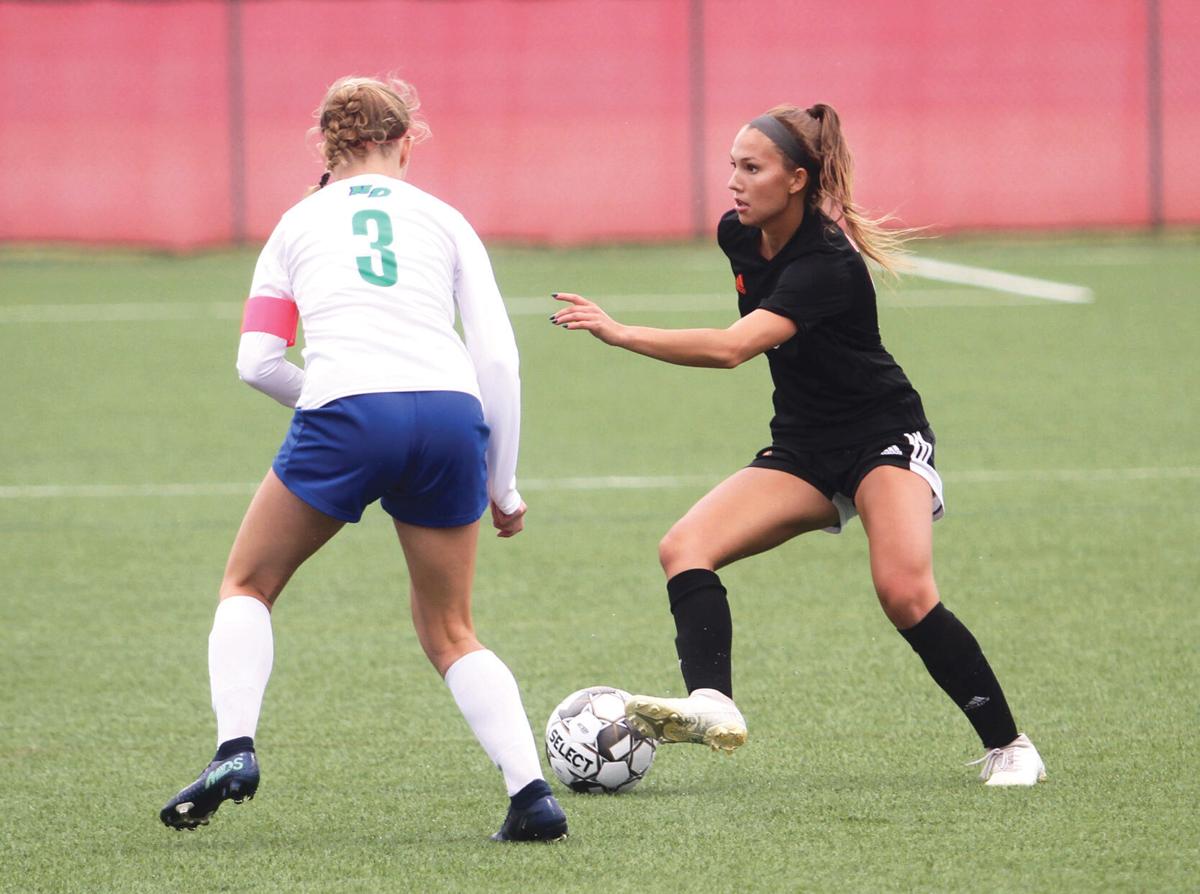 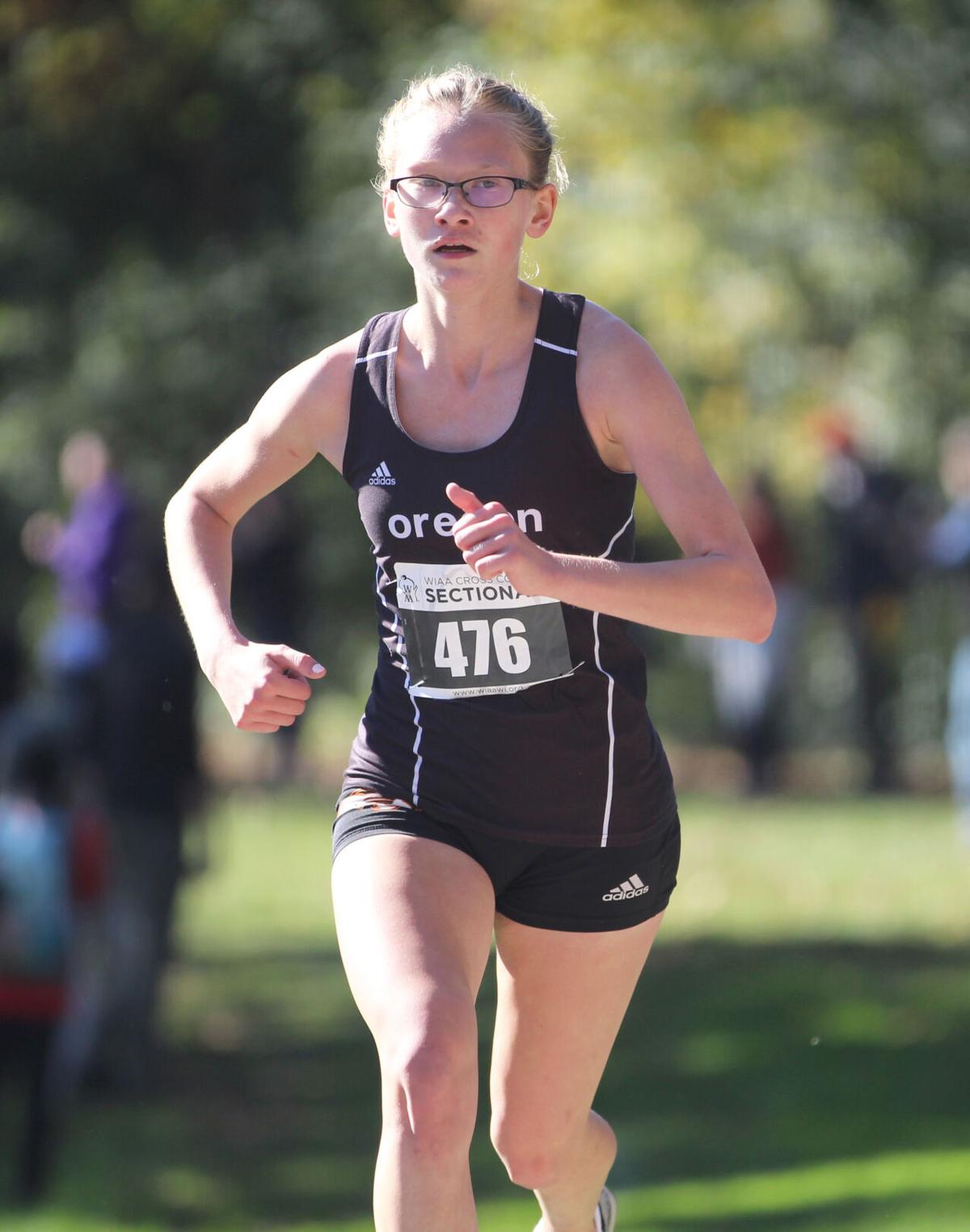 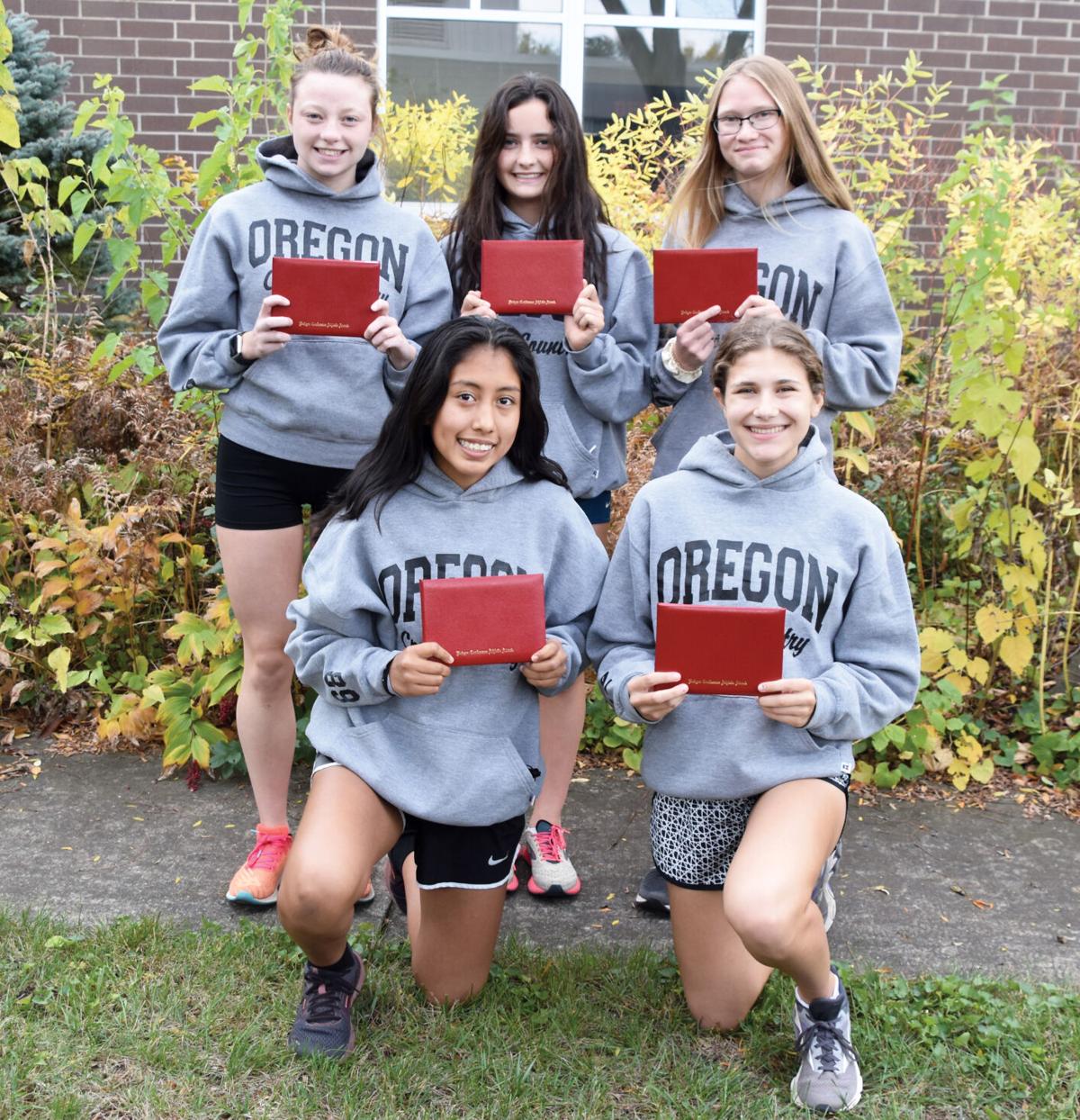 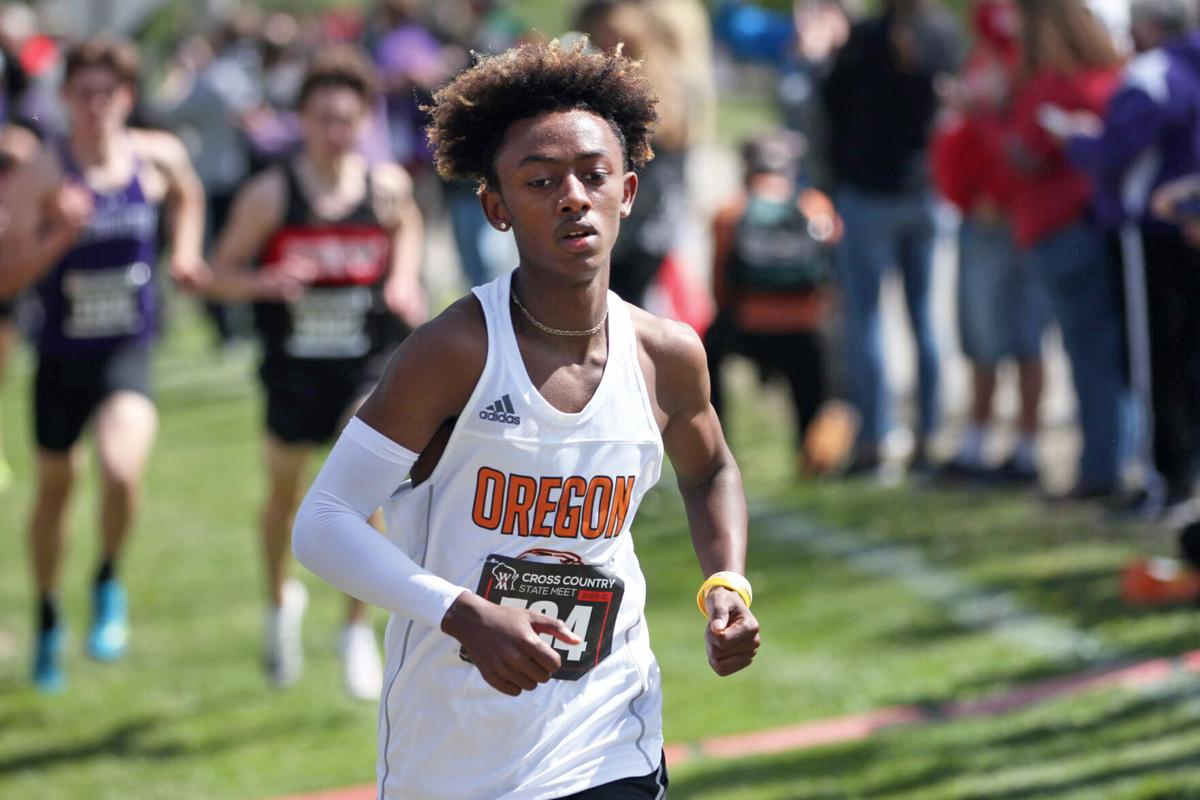 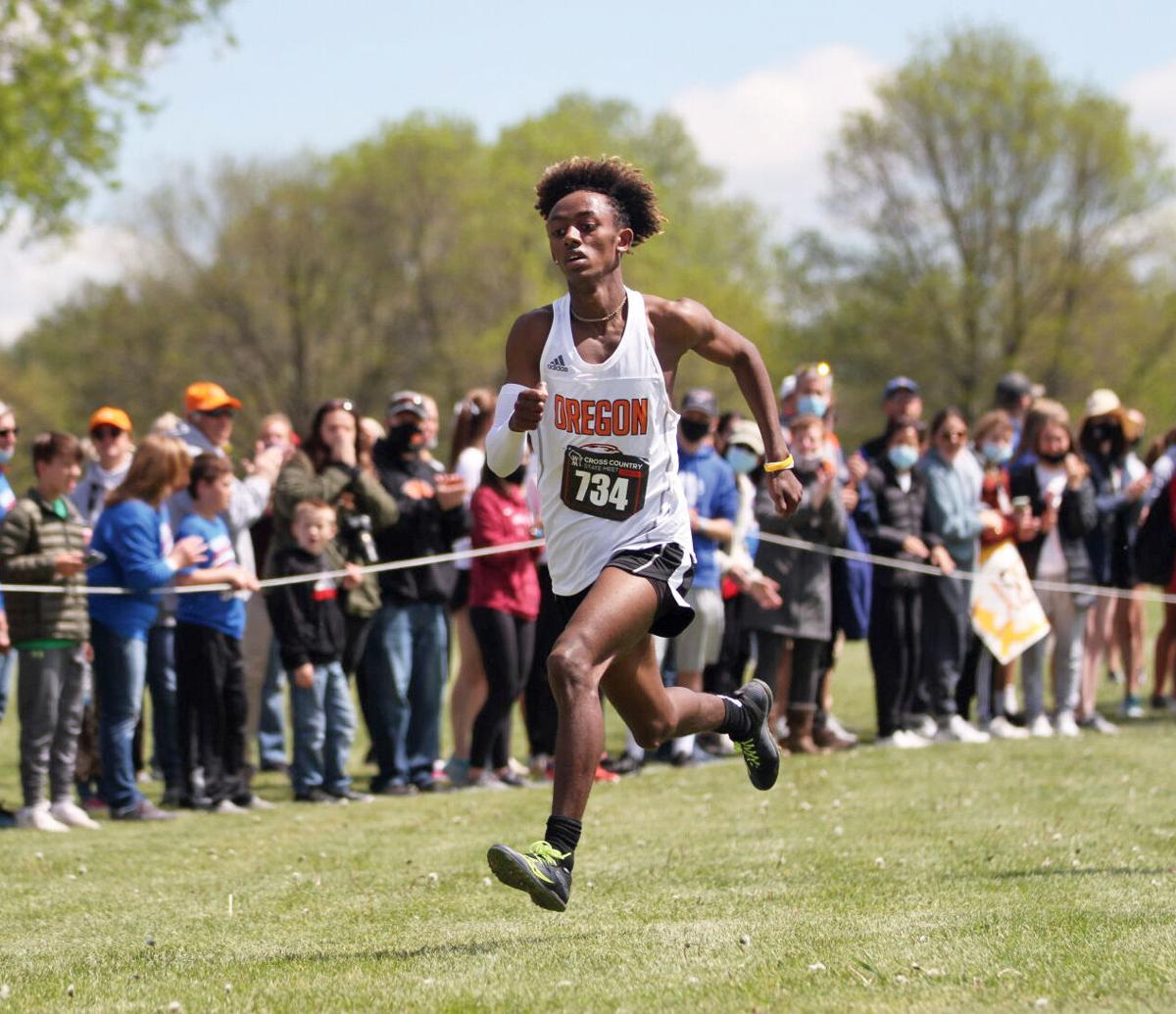 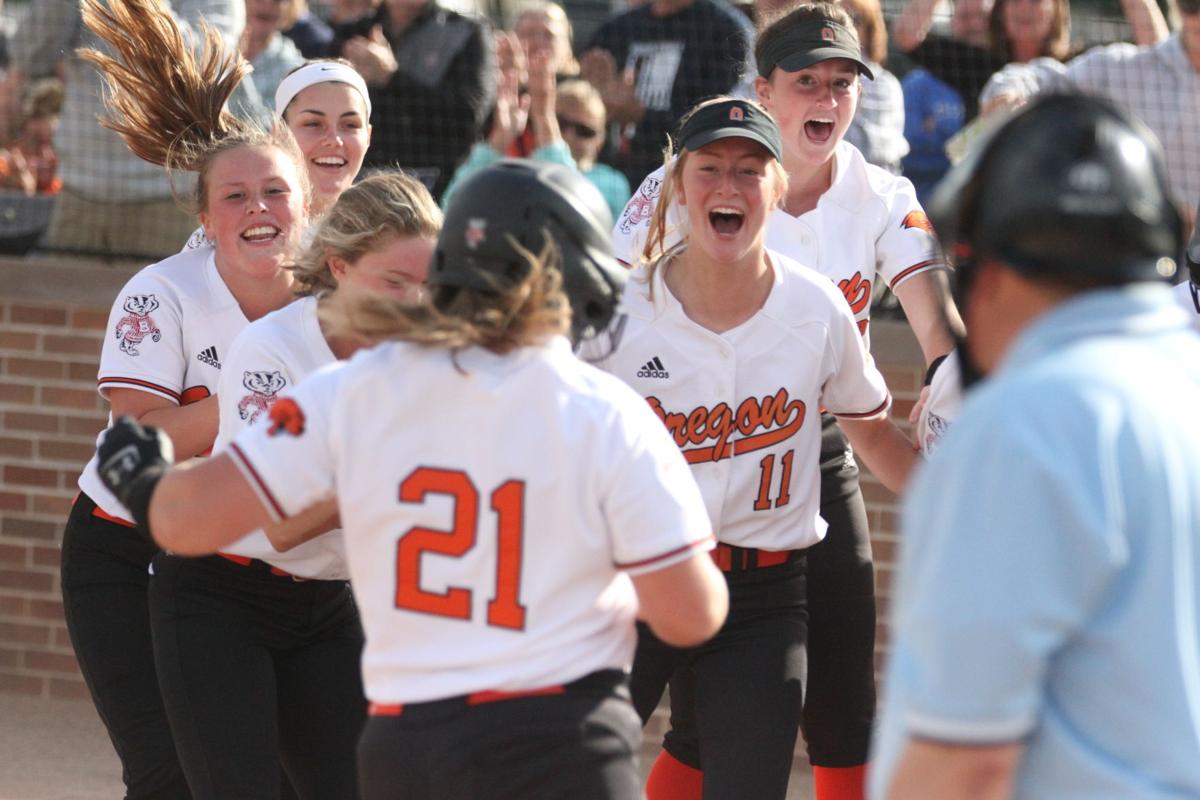 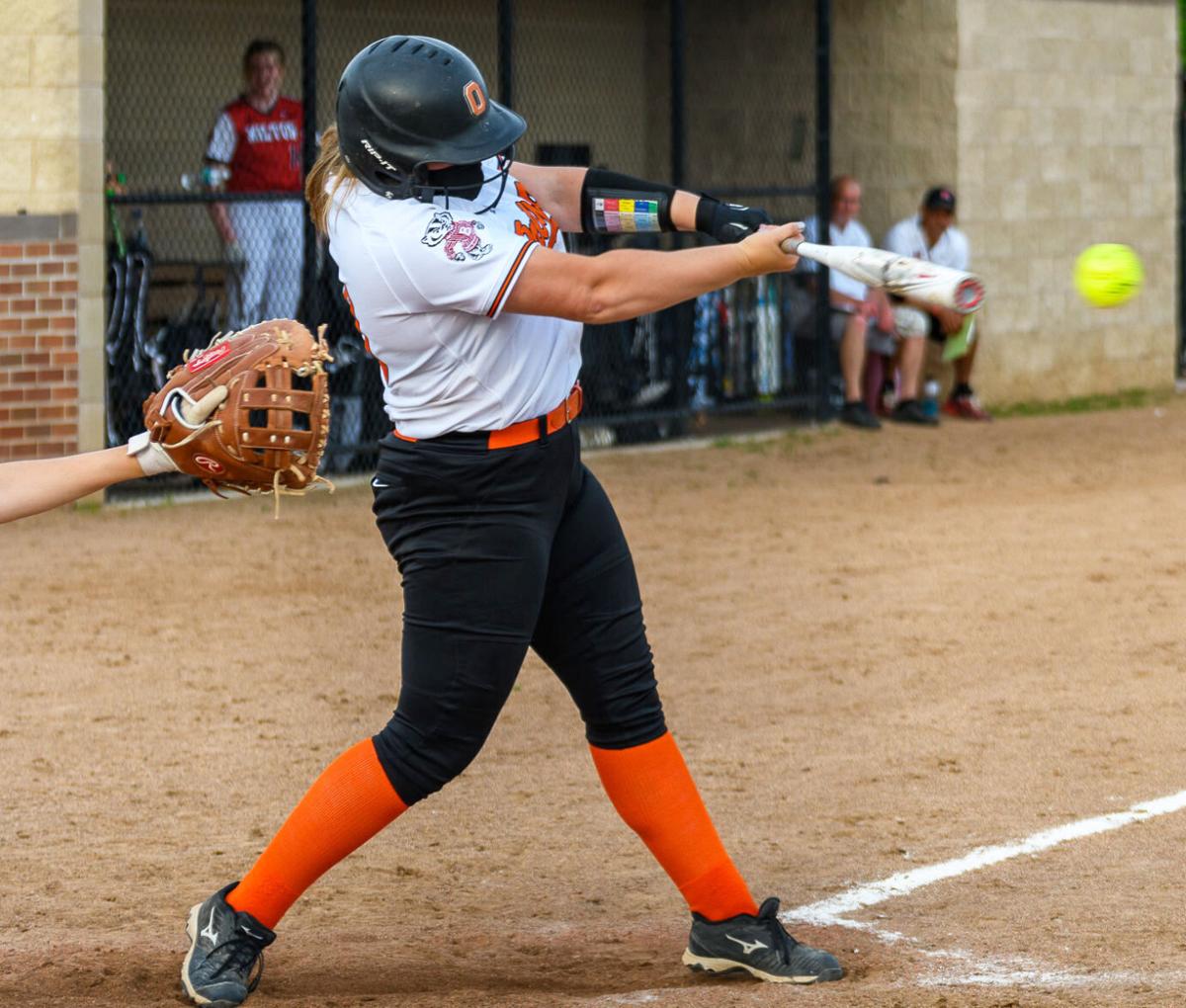 Oregon's Megan Bloyer records her 86th career hit in a Thursday, May 20 win over Milton. With the hit, Bloyer became the program’s all-time leader for hits.

Oregon's Eli Lehmann celebrates with fans after the Panthers defeated Whitefish Bay 3-1 in the state final on Saturday, Nov. 6, at Uihlein Soccer Park in Milwaukee.

The Oregon boys soccer team runs to its fans after the Panthers defeated Whitefish Bay 3-1 in the final on Saturday, Nov. 6, at Uihlein Soccer Park in Milwaukee.

Oregon's Jaelyn Nedelcoff (left) and Brianna Sauer celebrate after Nedelcoff’s goal in the first half of a Division 2 sectional final game at Oregon High School on Saturday, June 19.

Oregon's Megan Bloyer records her 86th career hit in a Thursday, May 20 win over Milton. With the hit, Bloyer became the program’s all-time leader for hits.

If anyone needed a reminder about Oregon’s soccer pedigree, this year served as one.

The boys and girls soccer teams both made magical postseason runs to reach the Division 2 state tournaments.

But soccer wasn’t the only sports story in Oregon.

It was also a year of triumph in cross country and a year of record-breaking performances on the softball diamond.

But in the end, it was soccer reigning supreme.

Here are the top five sports stories based on voting by the Observer’s sports department.

Captain Eli Lehmann filled with glee with the thought of a perfect state championship run his senior season.

“It’s legacy,” Lehmann said after the Panthers’ regional semifinal win over Racine Park. “I remember back when I was playing rec soccer over there (Jaycee Park). You see the high school guys, you see them in the state tournament. You want to be there. You want to be that team. Man, my senior year to go undefeated and win state, that would be special. It would mean a lot.”

Then the dream became a reality.

The Panthers’ special season was capped off with a 3-1 win against Whitefish Bay in the WIAA Division 2 state title game in early November in Milwaukee.

After a quiet couple of weeks, junior Noah Malcook came up with a big two-goal, one-assist performance in the state final game.

“He (Malcook) showed up huge,” Oregon head coach Chris Mitchell said after the state final. “I could just tell the first 10 minutes, his step, touch and pace were where we expected it to be and I knew he was going to be a difference maker and he was.”

“It doesn’t feel real, it kind of feels like a movie,” Lehmann said. “You hear that whistle blow and you see that scoreboard and you think, we really just had an undefeated, state championship season.

KT Schwass cemented herself in Panther sports lore when she scored the eventual game-winning goal for Oregon in its sectional final victory against Waukesha West in late June.

“In that game situation, the only thought going through your head is ‘The ball needs to be put in the net.’ And so, I saw the rebound come off, I looked up for a quick second and then it was head down and strike the ball,” Schwass said.

“That was awesome,” Oregon head coach Bobby Nichols said of the goal. “That’s exactly what we expect out of our seniors is to find those moments and capitalize on them.”

Oregon went on to lose a heartbreaker to Notre Dame in a WIAA Division 2 state semifinal.

The Panthers battled a weather delay and a devastating late no-call in their 2-1 defeat in overtime.

“Our goal is to play in the sectional final every year,” Nichols said. “That is where we should be. We know we are contending to come to state. We played a hell of a game against Waukesha (West). I think part of that is we had to play up to beat them. With a high comes a low and this was potentially our low point.”

Still, it was a special season that saw Oregon reach its sixth straight state tournament, win the Badger South Conference championship and have Jenna Bennett set the team’s single season record for most goals scored (67).

It was double the fun for the Oregon girls cross country team in 2021.

Oregon advanced to the alternate fall state cross country meet in May and then backed it up by advancing to another team state tournament in late October.

At the alternate fall state meet, the Panthers earned state runner-up honors. Oregon was led by Dasha Vorontsov, who finished fifth with a time of 18 minutes, 53 seconds.

“They raced their hearts out. That’s all I know,” Debroux said of his team’s performance. “And it’s just been a dream working with them because they prepare year-round and they work so hard. So right now I’m just — I can’t even tell you how proud I am. They were ready for this moment.”

Oregon finished 15th overall at the state meet in October in a season that also saw Vorontsov reset her own school record in the 5K. The Panthers also won the Badger West Conference championship in October with five runners making all-conference honors.

“The reason we go to all the big invitationals is to prepare for a state meet like this,” Debroux said. “I think our girls performed extremely well. They were ready for this moment. They are not afraid to compete against anybody and they gave it their all.”

Yordanos Zelinski was a record breaker in 2021.

Zelinski clocked in with a time of 15 minutes, 35.3 seconds.

“I had to trust my training,” Zelinski said. “I knew I was capable of getting the record. Last year at that course my time was 15:57, so I tied it. This year I wanted it more. I’ve been putting in the time and effort. I didn’t see a reason why I couldn't get it.”

That came after Zelinski finished seventh overall at the alternate fall state boys cross country meet in May.

Sandwiched in between the seventh-place finish at state and Zelinski’s record-breaking run was Zelinski helping the 3,200-meter relay team set the school record in the event at the Division 1 state track and field meet at UW-La Crosse in June.

Zelinski teamed up with Connor Blanke, Brenden Dieter and Eli Weink for the record-setting time of 8:02.72.

“Everybody did their part, and I just went out there and did my part,” Zelinski said. “Our goal was just to get the school record and we wanted to podium, so we made that happen.”

Bloyer became the all-time leading hitter in Oregon softball history with 108 hits after breaking the record during her senior season. She finished her high school career with 80 RBI, 27 doubles and 17 home runs. She owns two of the top three program records for hits in a season, as well as the record for doubles in a season and RBI in a season. She sits in the top 10 for every major statistic, according to Oregon head coach Scott Mirkes.

“Her (Bloyer’s) name is all over the record book. But ultimately, records are just numbers,” Mirkes said. “There’s much more behind playing any sport. … and her legacy lives beyond that. What we accomplished as a team is really due to their leadership.”

Bloyer hit her first home run at home in her career to help advance the Panthers out of a WIAA Division 1 sectional semifinal in June. The Panthers ultimately fell short against Burlington in the sectional final.

Despite not making it to state, Oregon advancing to the sectional final was the best finish in program history.

For a team that felt underestimated from day one, they said it was a season to be proud of following their sectional final defeat.

“This is the most gratifying and rewarding team I think I’ve ever coached,” Mirkes said.