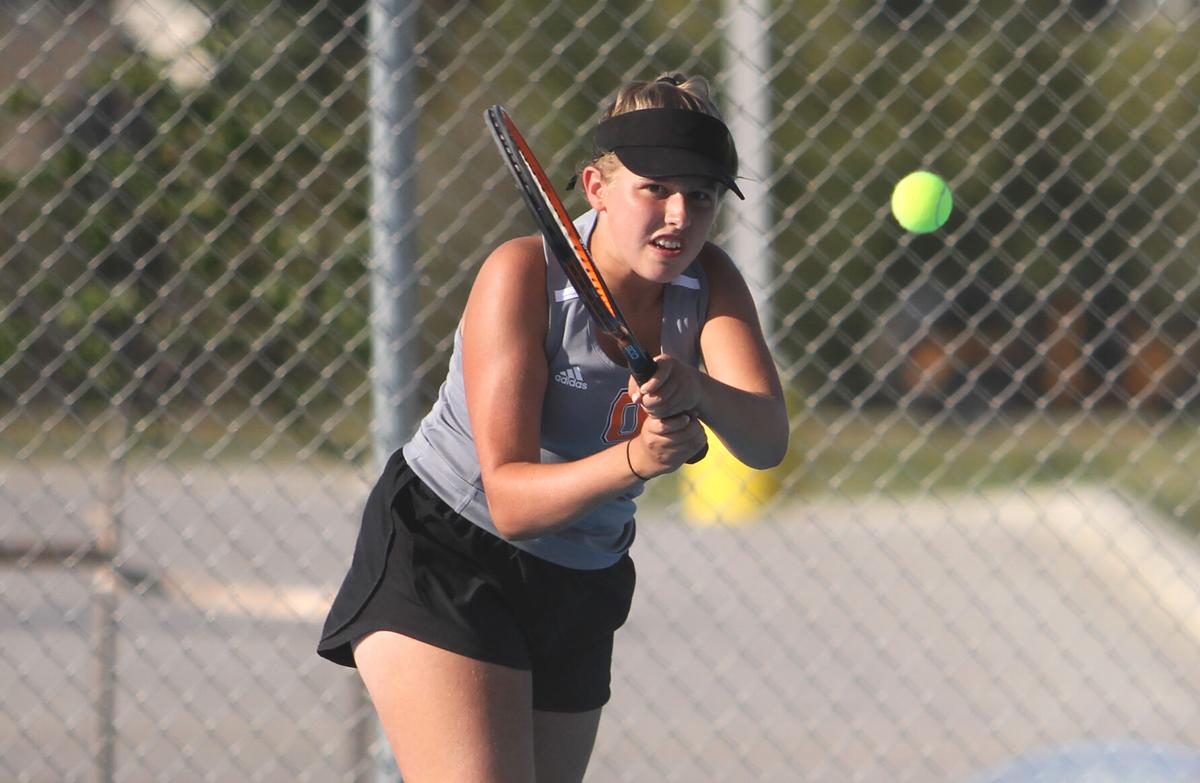 Oregon's Kimberly Urban hits a return shot in a No. 3 singles match against Verona junior Zoe Qureshi in a match on Friday, Sept. 10, at Verona Area High School. 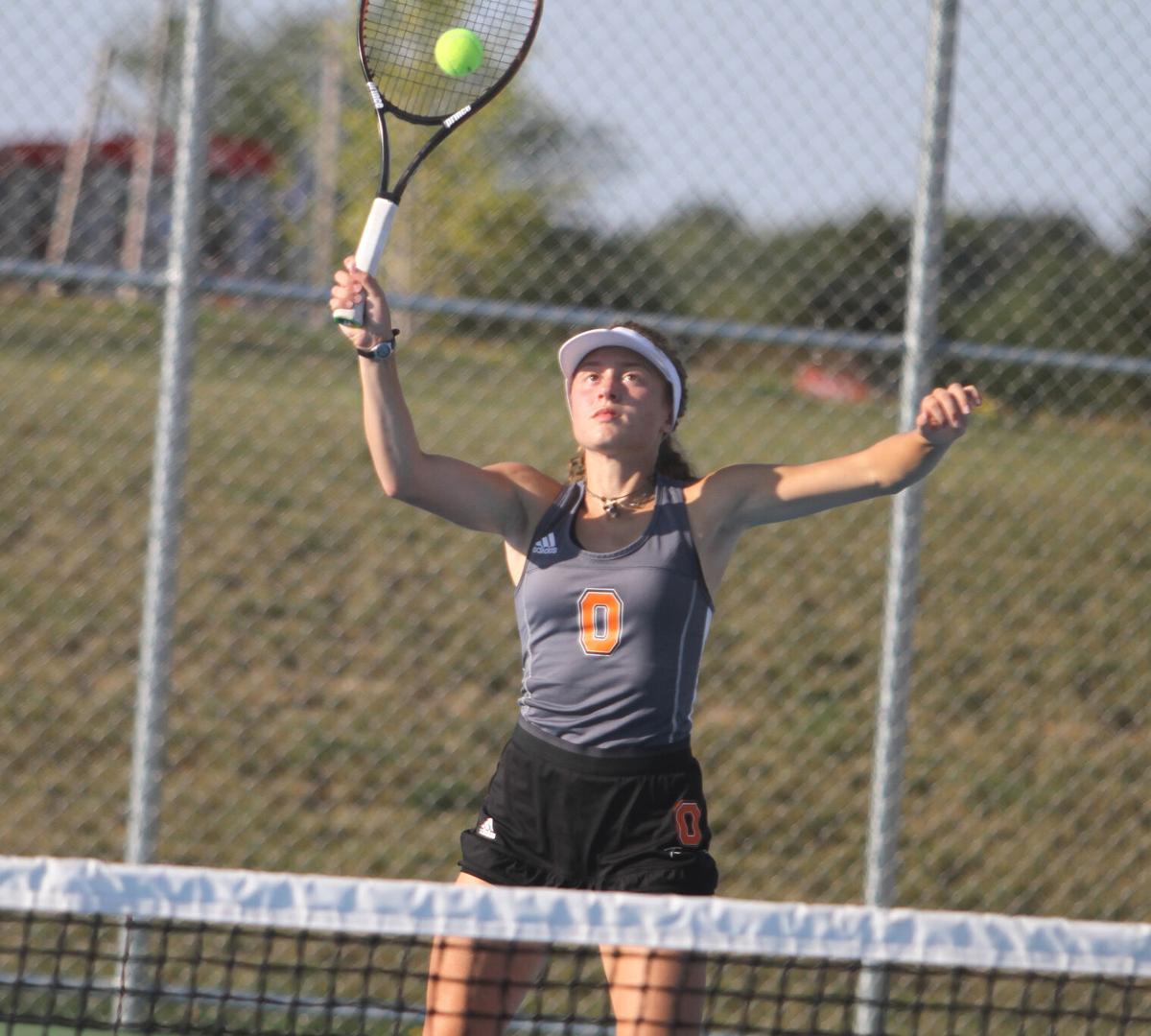 Oregon senior Ella Wirtz hits an overhead shot in a No. 1 doubles match against Verona senior Morgan Kreuser and junior Julia Huseth in a match on Friday, Sept. 10, at Verona Area High School.

Oregon's Kimberly Urban hits a return shot in a No. 3 singles match against Verona junior Zoe Qureshi in a match on Friday, Sept. 10, at Verona Area High School.

Oregon senior Ella Wirtz hits an overhead shot in a No. 1 doubles match against Verona senior Morgan Kreuser and junior Julia Huseth in a match on Friday, Sept. 10, at Verona Area High School.

Oregon girls tennis coach Joan Mohr has seen a lobs hit by the Panther players the past few matches.

That’s why she shuffled some of her doubles lineup in a nonconference match against Verona. Still, the Panthers dropped all seven flights in a 7-0 nonconference loss to the Wildcats, ranked fifth in the Wisconsin Tennis Coaches Association state rankings, on Friday, Sept. 10, at Verona Area High School.

“Some of them are kind of stuck in a rut,” Mohr said. “We wanted to mix it up in a nonconference match to see how they can play.”

It was a big challenge for the Panthers against a Verona team that has three singles players that are 17-0 this season.

“I’m hoping with our doubles we learn to hit volleys better and not hit lobs all the time,” Mohr said. “That is why I have given them a different partner so they can get that down because I have seen a lot of lobs. Varsity shouldn’t be hitting a lot of lobs. They should have more control and be able to hit it closer to the net.”

The Panthers were looking to bounce back after a 6-1 loss to Baraboo in a Badger West Conference match on Thursday, Sept. 9, at Oregon High School.

Junior Stepahnie Lo was switched from No. 2 singles and played No. 1 doubles with senior Ella Wirtz in a matchup against a Verona duo that qualified for state last spring.

Senior teammate Emma Yeakley, who usually teams up with Wirtz at No. 1 doubles, played No. 2 doubles with Anna Johnson.

The Wildcats’ No. 1 doubles team of junior Julia Huseth and senior Morgan Kreuser defeated Wirtz and Lo 6-4, 7-6 (4). At No. 2 doubles, Verona’s Andrea Chavez-Lazaro and Morgan Witkowski knocked off Johnson and Yeakley 6-2, 6-0. The Wildcat sister duo of Annie Nick and Erin Nick defeated the Panthers’ Kristelle Sommers and Anna Martin 6-1, 6-0.

Verona freshman Naisha Nagpal, who is 17-0 this season, defeated Ella Peotter at No. 1 singles 6-1, 6-3. At No. 2 singles Verona senior Samnatha Breitbach cruised past Oregon’s Elena Behdad 6-1, 6-1 and Verona junior Zoe Qureshi at No. 3 singles breezed by Oregon’s Kimberly Urban 6-0, 6-0. At No. 4 singles, Verona senior Elsa Queoff knocked off the Panthers’ Mary Jo Sommers 6-0, 6-0.

Behdad at No. 3 singles won the lone match for the Panthers in a conference home match against Baraboo Sept. 9.

Behdad defeated Baraboo’s Eva Huffaker 6-1, 6-1. The Thunderbirds won all three singles matches. The closest one came at No. 2 doubles where Baraboo’s Claire Bildsten and Annie Langkamp defeated Martin and Urban in three sets 1-6, 6-3, 6-1. The Thunderbirds’ No. 1 doubles team of Paige Lewison and Lanie Koppie rolled by Wirtz and Yeakley 6-2, 6-0. At No. 3 doubles, Baraboo’s Eryn Benson and Adrienne Crubel defeated Oregon’s Kristelle Sommers and Katherine Stoneman 6-3, 6-4.