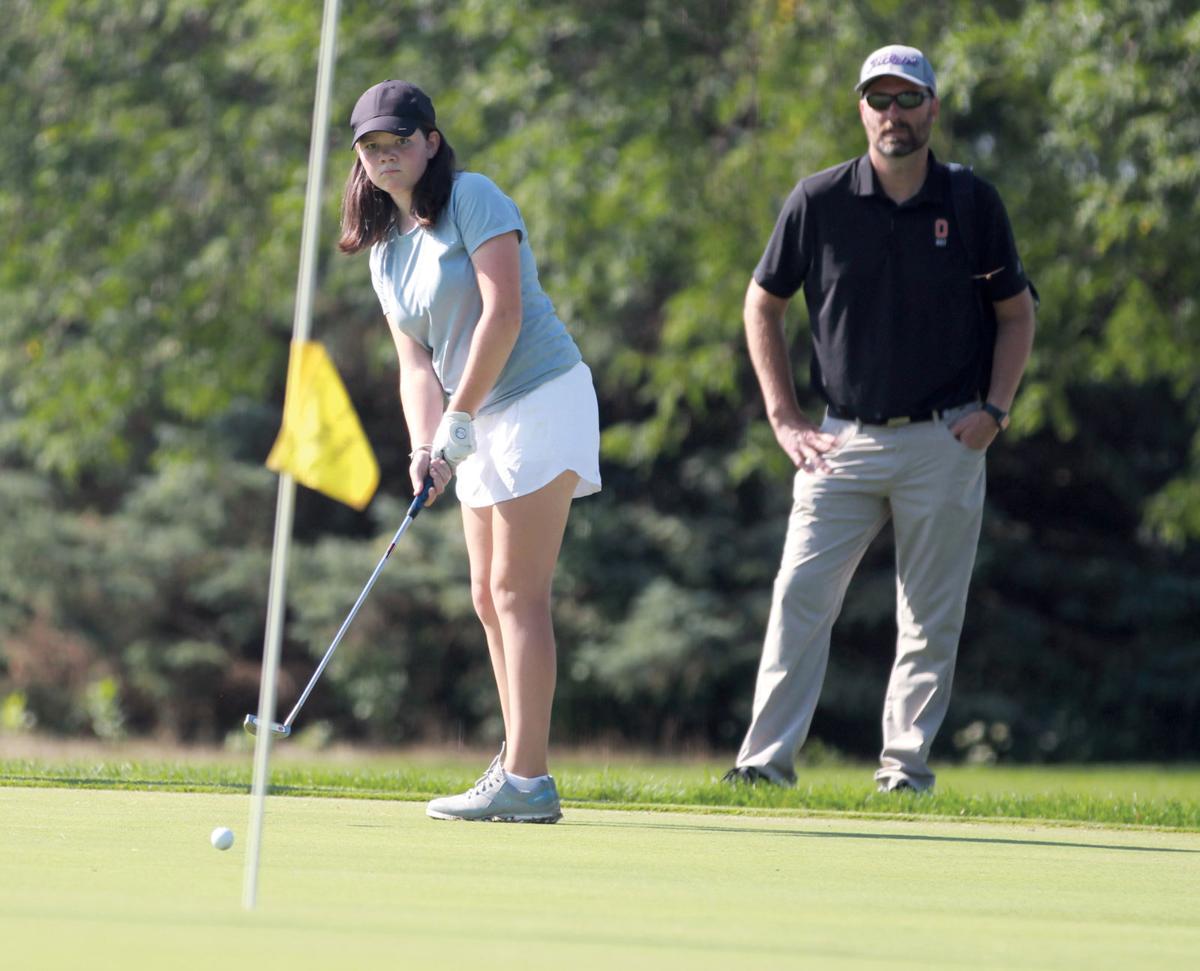 Oregon’s Delainey Halverson watches a putt roll to the hole as head coach Casey Johnson looks on during the Stoughton scramble Tuesday, Aug. 17, at Coachman’s Golf Resort in Edgerton. 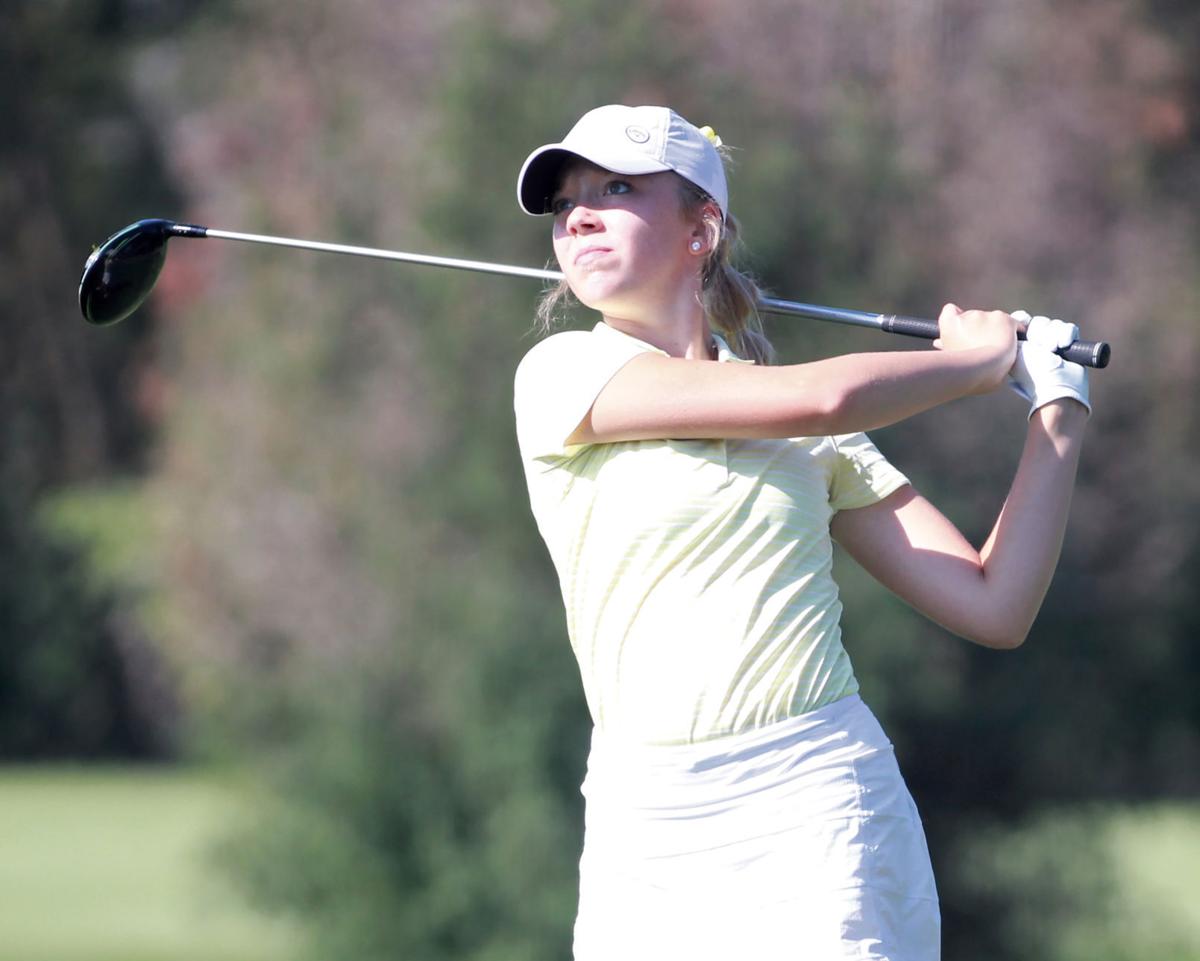 Oregon’s Emily Hopp watches a drive during the Stoughton scramble on Tuesday, Aug. 17, at Coachman’s Golf Resort in Edgerton.

Oregon’s Delainey Halverson watches a putt roll to the hole as head coach Casey Johnson looks on during the Stoughton scramble Tuesday, Aug. 17, at Coachman’s Golf Resort in Edgerton.

Oregon’s Emily Hopp watches a drive during the Stoughton scramble on Tuesday, Aug. 17, at Coachman’s Golf Resort in Edgerton.

Senior Emily Hopp carded a 37 to lead the Oregon girls golf team to a 180-233 season-opening win over Portage on Monday, Aug. 16, at Portage Country Club.

“Emily’s driver was on fire,” Oregon head coach Casey Johnson said. “She could put her drive pretty much wherever she wanted. It was really fun to see. Obviously she was always set up well coming in for approach shots. She just played a really good game.”

Freshman Addison Sabel finished with a 45 in her high school debut, good for second on the team.

“She’s definitely capable of those lower scores,” Johnson said. “I think she has a high ceiling to continue to improve this season. She’s playing some really good golf.”

Fellow freshman Delainey Halverson was just two strokes back with a 47.

Oregon’s 180 was rounded out with sophomore Drew Hoffer’s 51. Junior Kennedy Gladden fired a 52.

Reedsburg won the scramble with a team score of 62. The Panthers finished three strokes back with a 65, which was good for 5-under par.

“It’s good to just play together and encourage each other,” Johnson said. “We just enjoyed the day as a team.”

Reedsburg 167, Oregon 171Hoffer led the Panthers with a 39 in a close Badger West dual loss to Reedsburg at Foxboro Golf Club in Oregon on Wednesday, Aug. 18.

“We were neck-and-neck all the way through to the last couple holes,” Johnson said. “They ended up beating us by four. They (Reedsburg) have a solid team.”

Hoffer’s 39 was a 12-stroke improvement from her season-opening 51.

“At Portage, she couldn’t control her drives,” Johnson said. “Her drives were leaking out on her, she often ended up on the right-side of the fairway. Playing behind trees and playing in trouble, it’s really hard to have a good score. She really straightened her drives. She was playing so well at home.”

Hopp carded a 42 for the Panthers, while Halverson finished with a 44. Sabel rounded out the scoring with a 46 and Gladden fired a 53.

Milton best ballThe duo of Hopp and Hoffer carded a 78 to help the Panthers to a second-place finish at the Milton best ball invitational Thursday, Aug. 19, at Oak Ridge Golf Course.

Sabel and Halverson teamed up for an 85, while Gladden and Riley Jackson finished with a best-ball score of 100.

Oregon’s total score of 263 was only behind first-place Janesville Craig’s 250.