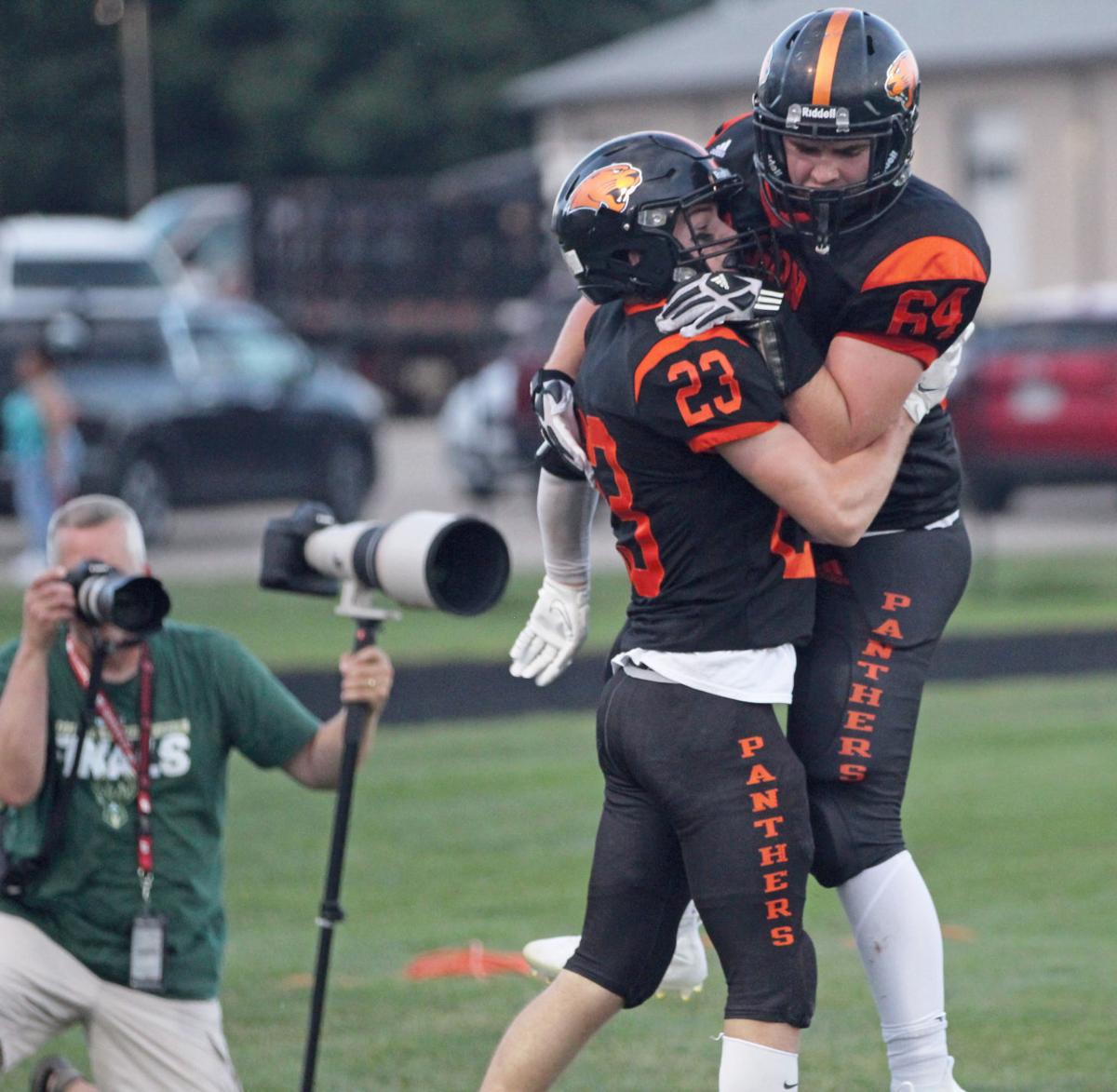 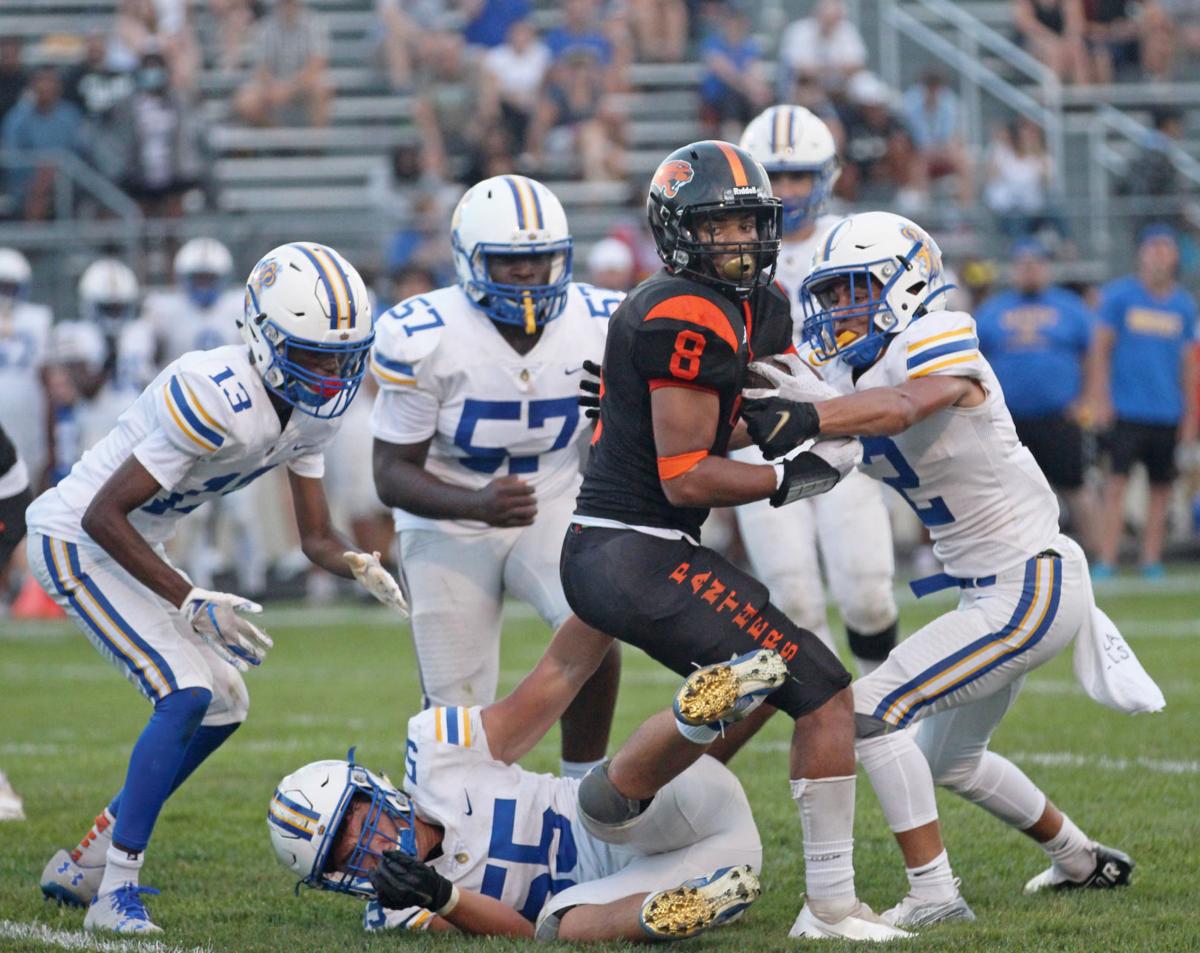 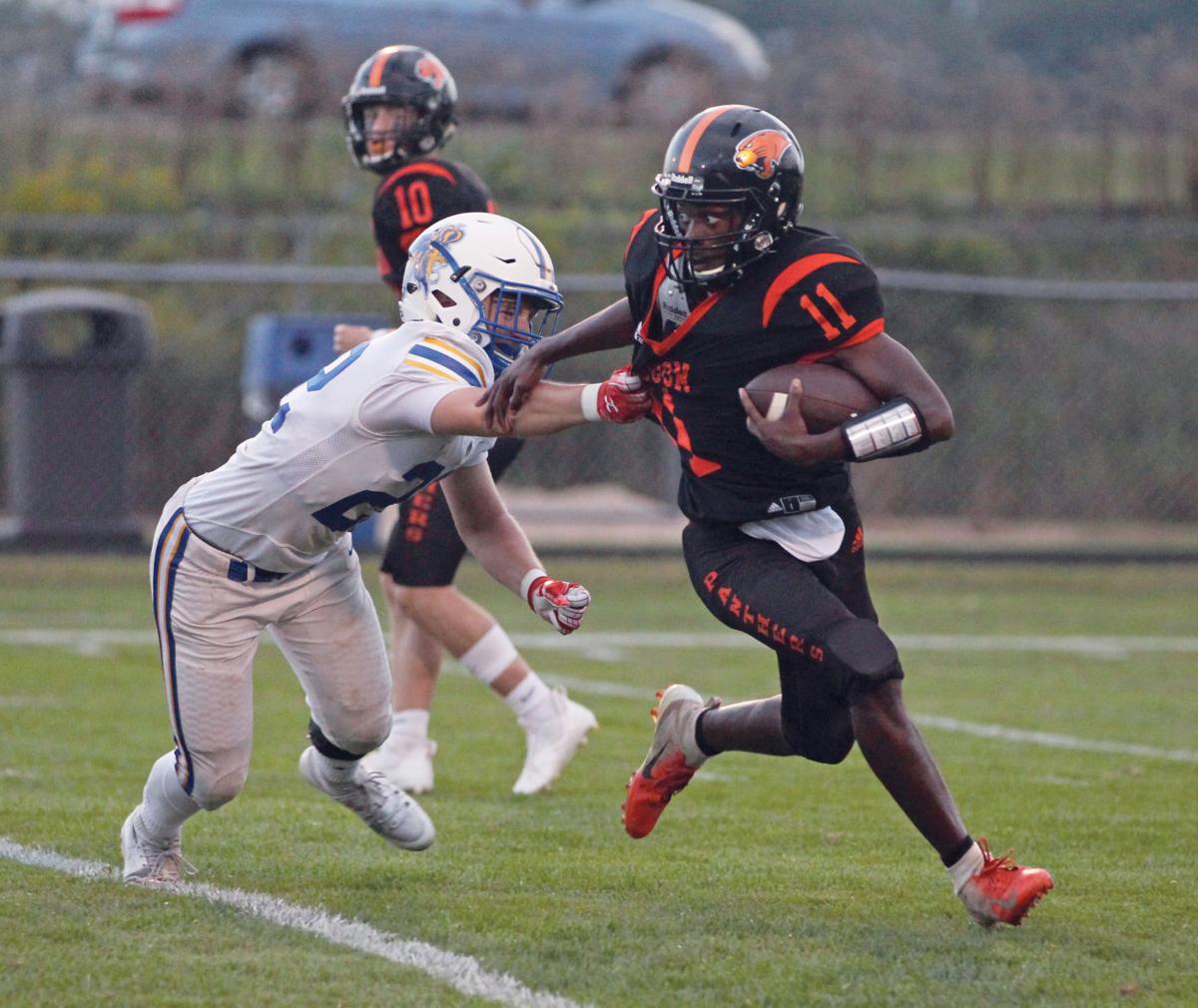 Oregon’s Amir Warren breaks a tackle in the backfield during the Panthers’ 49-14 victory over Madison West Thursday, Aug. 26, in Oregon. 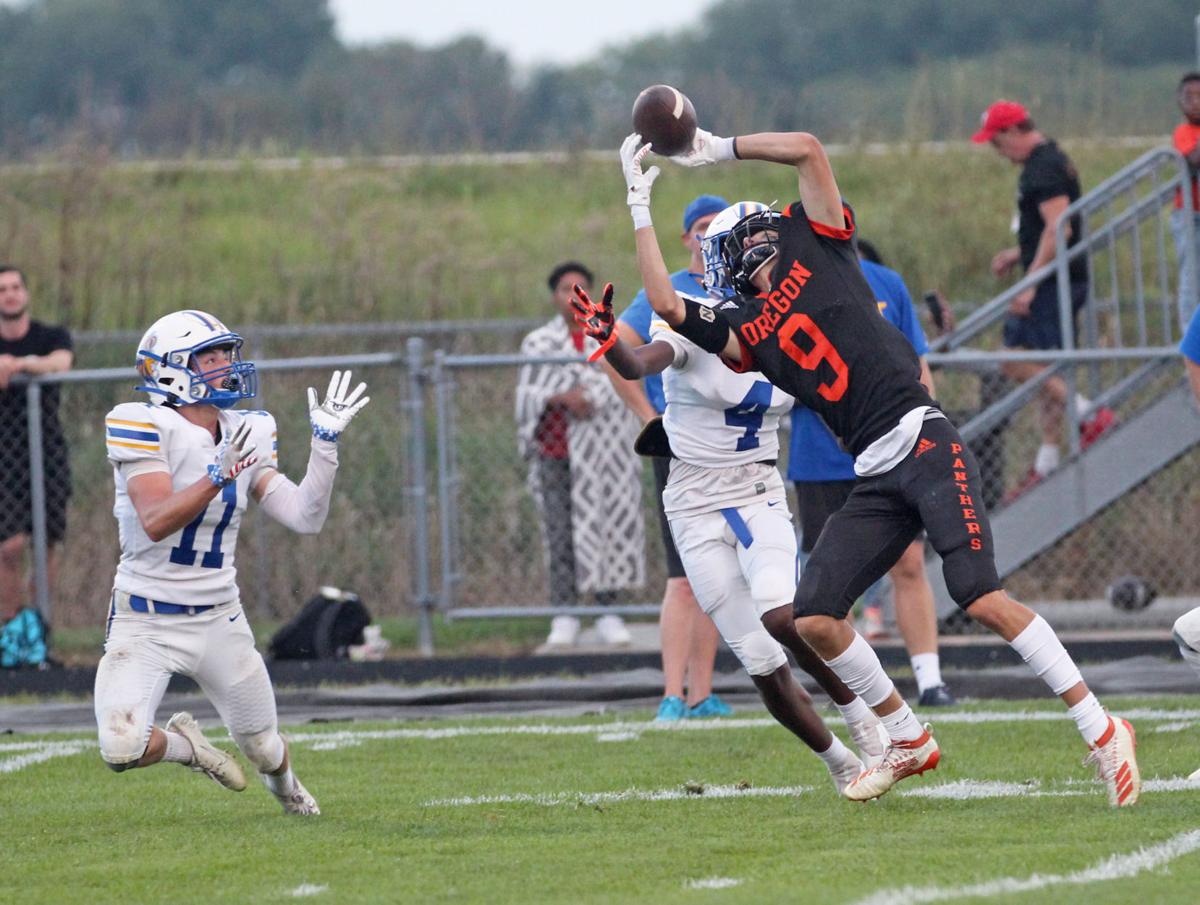 Oregon’s Henry Weink catches a pass in traffic during the Panthers’ 49-14 victory over Madison West Thursday, Aug. 26, in Oregon. 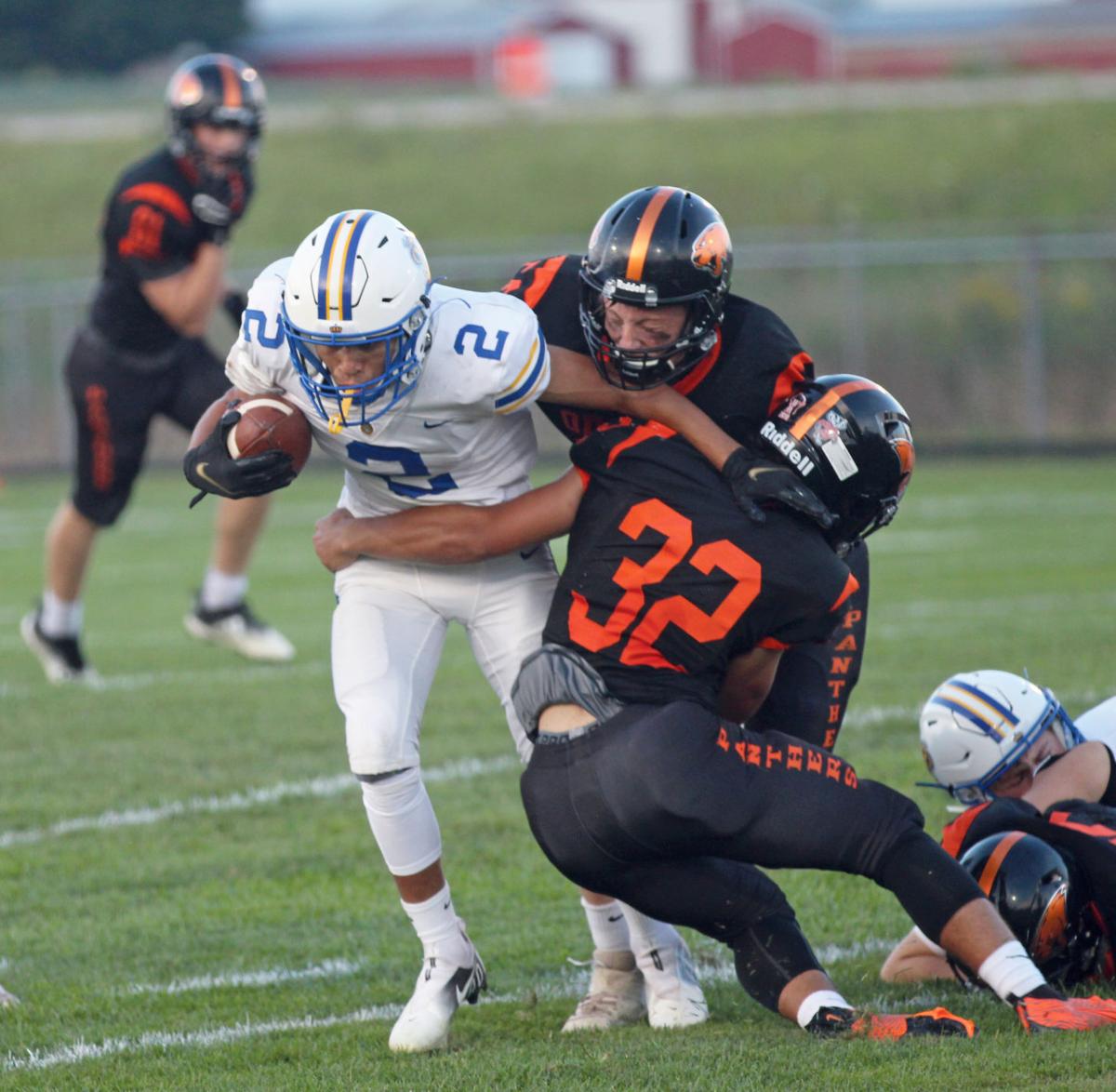 Oregon’s Andrew Naives (32) gets help from a teammate wrapping up a Madison West runner during the Panthers’ 49-14 victory over Madison West Thursday, Aug. 26, in Oregon.

Oregon’s Amir Warren breaks a tackle in the backfield during the Panthers’ 49-14 victory over Madison West Thursday, Aug. 26, in Oregon.

Oregon’s Henry Weink catches a pass in traffic during the Panthers’ 49-14 victory over Madison West Thursday, Aug. 26, in Oregon.

Oregon’s Andrew Naives (32) gets help from a teammate wrapping up a Madison West runner during the Panthers’ 49-14 victory over Madison West Thursday, Aug. 26, in Oregon.

But it was all the time Oregon needed to show off its three-headed running attack.

“We’re just all connected, we’re really good friends,” Szudy said of the running back group. “We’ve known each other since fourth grade. We all have our own traits. I’m more of a power back, while Amir and Austin are more shifty and can run really fast. We’re just really special because we’re dynamic. They can’t key in on all three of us, they have to pick one of us to defend.”

The Panthers scored on their first two offensive plays from scrimmage with touchdown runs from Warren (61 yards) and Szudy (85 yards). Saunders found the end zone on Oregon’s third possession to make it 21-0.

On the night, the trio combined for six touchdowns, with each player scoring twice.

“They know the ins and outs and just know what to do,” Oregon head coach Dan Kissling said of the trio.

The Panthers (1-1) started with the ball at their own 39-yard line and on the first play from scrimmage, Warren burst up the middle for a 61-yard score.

It looked like the Regents (0-2) were about to head into the red zone and respond after a 30-yard run got the ball to the Panther 4-yard line, but a holding penalty wiped out the play.

Oregon junior Simon Dosher ended up making Madison West pay for the penalty as the defensive back picked off a tipped pass to set up the Panthers on their own 15-yard line.

Then, it was Szudy’s turn to make a play.

The 6-foot-1, 210-pound tailback broke free on Oregon’s first play of their second drive, taking it 85 yards to the house.

After a three-and-out by the Regents, it was time for Saunders to show off his skills.

Shortly after, the shifty Saunders found a hole and took it 24 yards to the end zone to make it 21-0 Oregon with 2:39 to play in the opening quarter.

Madison West got on the board after an Oregon fumble in the second quarter, cutting the deficit down to 21-8 with 6:58 to play until half.

Kessenich once again connected with Weink on a long pass play, eventually leading to the same result — a touchdown run from Saunders.

The Regents had an opportunity to grab some momentum heading into halftime, but a fourth-and-7 pass at the Panther 10-yard line sailed high.

Oregon went on to march 90 yards — capped off with a touchdown pass from a scrambling Kessenich to Warren from 26-yards out.

Kessenich’s ability to connect on deep shots was key in keeping the Regent defense honest.

“It’s huge all-around,” Kissling said. “Just for our opponents to see it, it’s going to help us. Now that they know we can go deep, they can’t go eight guys in the box to try and stop our run.”

The late 14-point swing gave the Panthers a 34-8 lead at halftime.

It was much of the same in the second half as Szudy found the end zone on an 8-yard run with 9:02 in the third quarter to extend the lead to 42-8. Szudy ended with a game-high 117 rushing yards on 10 carries. As a team, the Panthers racked up 330 yards on the ground.

Madison West threw for a touchdown in the middle of the fourth quarter and Oregon capped off the scoring with another rushing TD shortly after.

Although outsized, the Oregon offensive line did its job Thursday opening up lanes for the Panthers’ backs.

“They were determined after last week when we came up a little bit short,” Szudy said. “We wanted to come out here and make a statement.”

Oregon takes on DeForest in a Badger Large Conference opener next week on the road at 7 p.m.

Oregon football coach Dan Kissling has the luxury of using a three-pronged attack at running back this season.