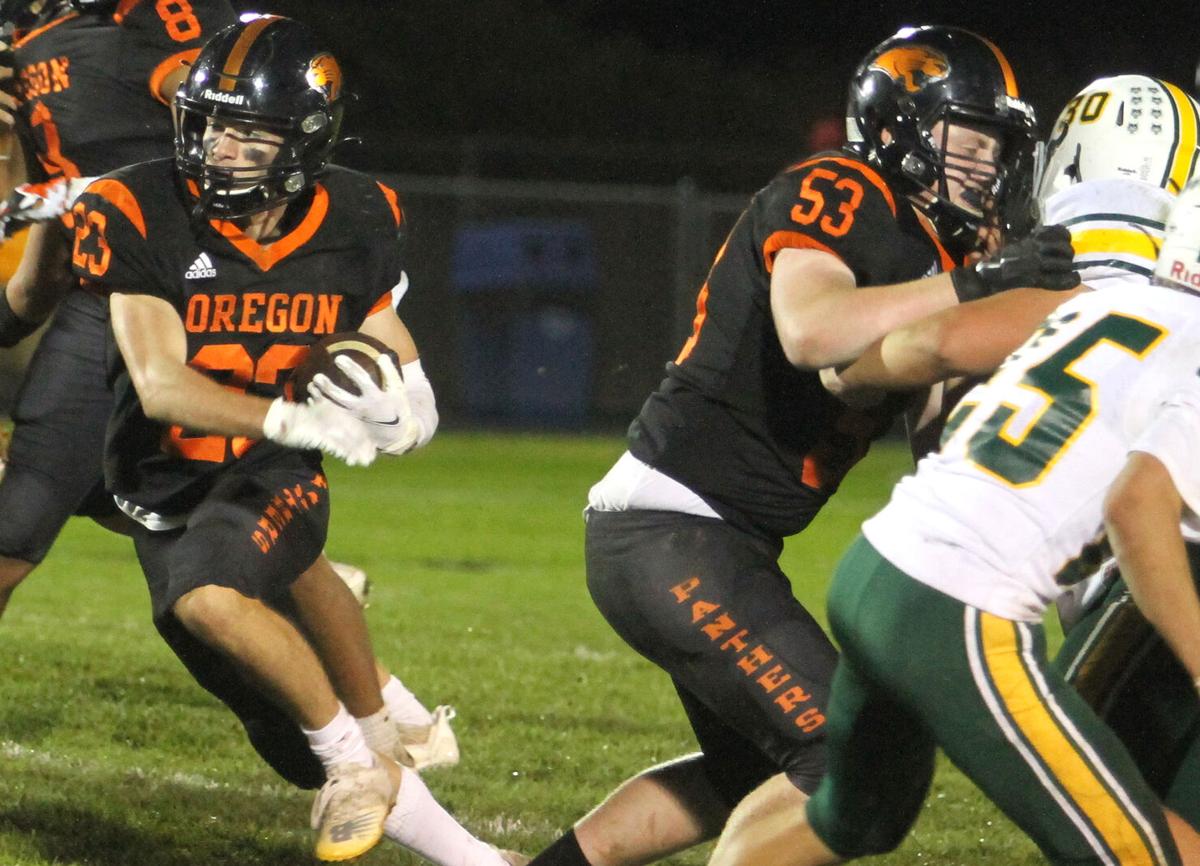 Oregon senior running back Austin Saunders (23) gets a block from senior Johnathan Meyer (53) in the first half. Oregon lost to Beaver Dam 26-21 on Friday, Sept. 24, in Oregon. 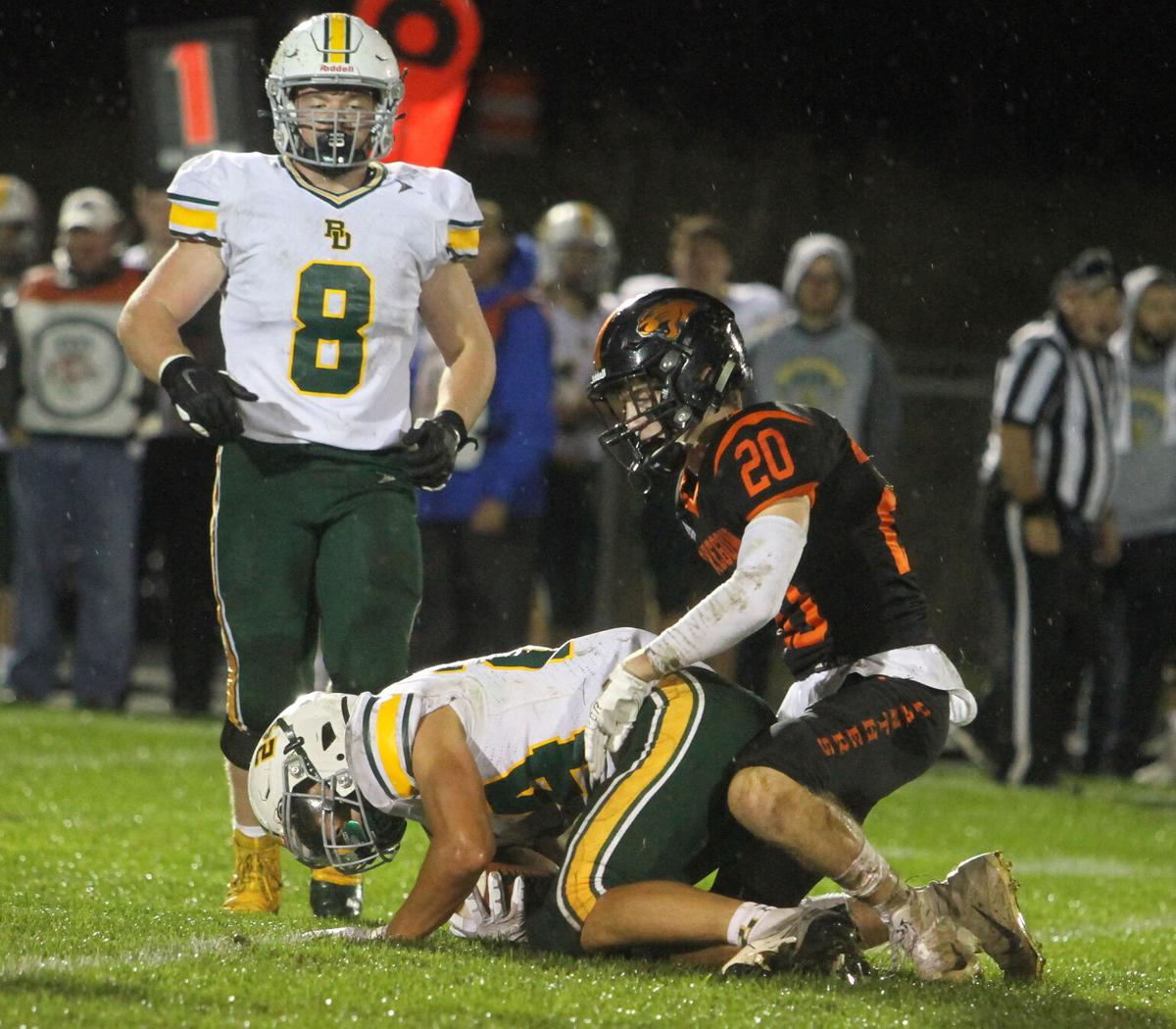 Oregon senior running back Austin Saunders (23) gets a block from senior Johnathan Meyer (53) in the first half. Oregon lost to Beaver Dam 26-21 on Friday, Sept. 24, in Oregon.

Finding a way to stop Beaver Dam’s old-school football Single-Wing offense that featured a heavy diet of direct snaps to running backs who picked openings behind an extra tackle and fullback proved to be a nightmare to stop for Oregon.

Beaver Dam sophomore running back Gabe Klatt rushed for 243 yards and two touchdowns to lead the Golden Beavers to a 26-21 win over Oregon Friday, Sept. 24, in Oregon.

Oregon drops to 2-4, 1-3 Badger Large. The Panthers will have to win their final three games to assure a playoff spot. If Oregon finishes the season 2-1, they could earn an extra qualifying spot if there are not enough teams that finished at least .500 in conference to fill the 226-team playoff field.

“It will be a really tough three games,” Szudy said. “I’m making sure everyone comes to practice and practices like it’s a game every day. We just want to win the next three games and have a playoff spot.”

Oregon rallied from a 14-point second-half deficit. There were no turnovers in the game by either team, but the Panthers did have two turnovers on downs - including an opening first quarter drive that was thwarted at the Golden Beavers’ 1-yard line.

“They did a good job of finishing,” said Suzdy, who rushed for 183 yards on 19 carries and scored two touchdowns. “We did all we could to come back. We just fell short because we didn’t finish.”

The Golden Beavers racked up 295 total yards. The Single-Wing is an unorthodox offense in which Beaver Dam used direct snaps to the running backs to pound the ball. Oregon struggled getting off the field on third down.

“We put a couple of extra guys in the box to stop that,” Oregon coach Dan Kissling said. “They have been moving the ball against every team they played. They are hard to defend because of how big they are and how they run that Single-Wing offense.”

Oregon didn’t use many weakside blitzes. One reason is because of the weakside counter the Golden Beavers have scored on an average of once per game this season. Each time Beaver Dam ran a counter against the Panthers on Friday, it went for a loss of yards.

Beaver Dam quarterback Cameron Mendoza tossed a 31-yard TD to Alex Soto on the opening drive of the third quarter to extend the Beavers’ lead to 20-6. Moments after that, Oregon senior running back Austin Saunders raced in for a 38-yard touchdown. Szudy ran in the two-point conversion to cut the Golden Beavers’ lead to 20-14.

It didn’t take the Panthers long to retake the lead on their next possession. Szudy rumbled on on a 68-yard run to set up the go-ahead scoring play. Szudy’s 1-yard TD plunge on the next play gave the Panthers a 21-20 lead with 4:22 left in the third quarter.

Beaver Dam regained the lead when Kaltt scored on an 8-yard run to take a 26-21 lead with 9:28 left in the fourth quarter.

On Oregon’s next possession, the Panthers faced a fourth-and-5 from the Beavers’ 20-yard line and looked to set up a screen pass, but junior quarterback Cameron Gates’ pass was incomplete, ending the drive on a turnover on downs.

Beaver Dam took over with 4:22 left and ran out the clock converting a key third-and-7 play on Klatt’s 9-yard run.

“Our kids played tougher than they did last week,” Kissling said. “I’m glad they competed. The problem was we just needed our offense to put one more in there. We have been asking our offense to do it all year long and they have been doing it.”

Early on, it looked like Oregon would seize the momentum and jump out to an early lead.

The Panthers drove 66 yards in 11 plays on their first drive of the first quarter. Facing a fourth-and-goal from the Golden Beavers’ 1-yard line, Beaver Dam stuffed Szudy on a run to force a turnover on downs.

Kissling said it was a surprise to see Beaver Dam come up with a goal-line stand.

Beaver Dam then marched 99 yards in 12-plays, capped off by Klatt’s 5-yard TD run. The Golden Beavers missed the extra point and led 6-0.

Oregon answered with a seven-play, 81-yard drive, culminating in Szudy’s 5-yard TD run to tie the game at 6 midway through the second quarter. The big play that kept the scoring drive alive was senior Amir Warren’s 29-yard run. Szudy had 12 and 16-yard runs on the drive.

“We just have to keep on getting better no matter what the score is,” Kissing said. “We have to find a way to win the final two. Both teams we play at the end of the year - Milton and Watertown are good football teams. Our goal is to finish 3-0 or 2-1 and hopefully we squeeze in.”