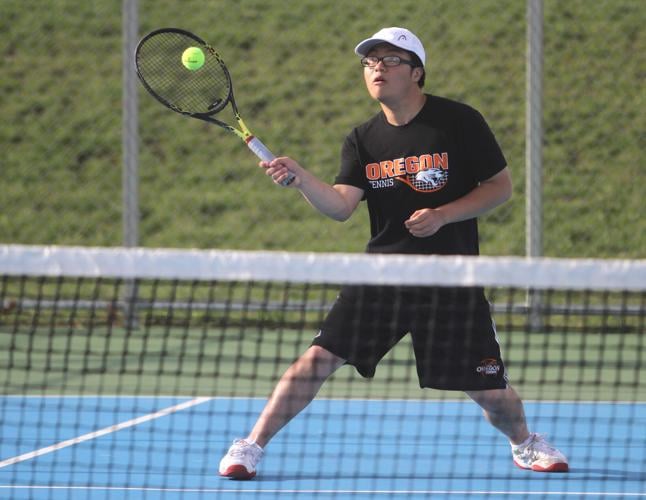 Oregon's Gordon Zheng hits a return shot at the net in a No. 1 doubles match against Verona's Josh Bradley and Riley Sass on Friday, May 6, at Verona Area High School. Zheng and Charlie Barnish lost to Bradley and Sass 7-5, 6-1. 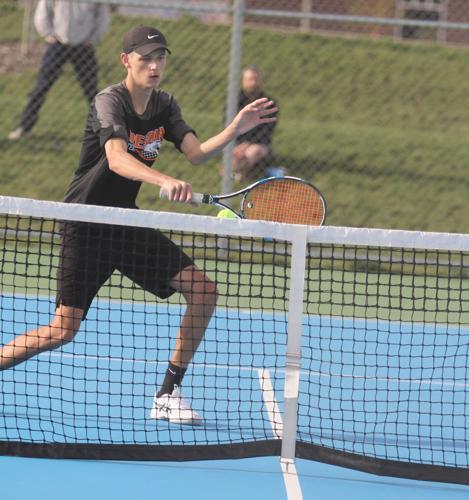 Oregon's Tralan Hake hits a return shot at the net in a No. 2 doubles match against Verona on Friday, May 6, at Verona Area High School. The Wildcats beat the Panthers 7-0. Hake and Josh Dieter lost to Verona's Jacob Brierley and Justin Happel 6-3, 6-3.

Oregon's Gordon Zheng hits a return shot at the net in a No. 1 doubles match against Verona's Josh Bradley and Riley Sass on Friday, May 6, at Verona Area High School. Zheng and Charlie Barnish lost to Bradley and Sass 7-5, 6-1.

Oregon's Tralan Hake hits a return shot at the net in a No. 2 doubles match against Verona on Friday, May 6, at Verona Area High School. The Wildcats beat the Panthers 7-0. Hake and Josh Dieter lost to Verona's Jacob Brierley and Justin Happel 6-3, 6-3.

The Oregon boys tennis team didn’t have to wait long to have a bounce-back match after dropping just a second dual match this season to Verona 7-0 on Friday, May 6, at Verona Area High School.

Oregon (8-2, 5-0 Badger West) captured the championship at the Stoughton Invitational on Saturday, May 7, at Stoughton High School. The Panthers had champions at five flights, including three singles players. Oregon racked up 17 points to clip Milton for the team title by three points in the eight-team invitational.

“I knew this was going to be our toughest test for sure,” Oregon coach David Kean said. “I’m happy for it. Unless you play good competition you are not ready when you come to it.”

The Panthers stayed in the hunt for a conference championship after knocking off Monroe 7-0 on Wednesday, May 4, at Oregon High School.

“We have had a lot of success, but we know to stay humble, understand where we are at and continue to strive and push for more,” Kean said.

Two singles players and doubles tandems for the Panthers captured championships at the Stoughton Invitational on May 7, in Stoughton.

The singles players who earned titles are Nicholas Schaefer at No. 2 singles, Joey Zuehlke at No. 4 singles, the No. 2 doubles team of Tyler Fisher and Trelkan Hake and the No. 3 doubles team of Christian Wirtz and Aaron Hakes.

Kyle Barnish at No. 1 singles and Samuel Halverson at No. 3 singles each went 2-1 and finished second place. The Panthers’ No. 1 doubles team of Gordon Zheng and Charlie Barnish also went 2-1 to take second.

Kyle Barnish had few problems early on, rolling to a 6-0, 6-0 victory over Jefferson’s Aidan Turner and beating Milton’s Reid Washkoviak 6-2, 6-4. Stoughton’s Hayden Schreier defeated Barnish in the title match in three sets 6-1, 5-7, 10-7. Halverson looked strong early on at No. 3 singles before a tough semifinal match.

The Panthers’ No. 2 doubles team of Fisher and Hake cruised by Stoughton’s Finnigan Novak and Joshua Phillips 6-0, 6-0. The Panthers’ duo then dominated in a 6-0, 6-1 victory over Janesville Parker’s Enrico Occhipinti and Jose Aparicio Bucheli. In the title match, Fisher and Hake defeated Milton’s Thomas Rody and Aleks Kablar 6-4, 6-1.

The Wildcats swept every flight en route to handing the Panthers just their second dual meet loss of the season.

Verona won 48 of the 54 games in singles matches.

“I figured that singles would be a bit of a struggle and I didn’t know how doubles would do,” Kean said. “Matches are close and are going to look closer than a lot of the scores appear.”

The closest matches for the Panthers came at doubles. In the closest match of the dual, Verona’s Sam Hudson and Luke Schorr at No. 3 doubles clipped Oregon’s Ethan Johnson and Wirtz 6-3, 7-5. The Panthers’ No. 2 doubles team of Hake and Josh Dieter lost to Verona’s Jacob Brierley and Justin Happel 6-3, 6-3. At No. 1 doubles, the Panthers’ Zheng and Charlie Barnish dropped straight sets to the Wildcats’ Josh Bradley and Riley Sass 7-5, 6-1.

“I hope they take away that they are ready from the start and when you are ready for a match you are mentally prepared for that,” Kean said. “You have to put points behind you both good and bad.”

Kean said the team needs to keep working on back hands and serves.

“If we take some softer second serves we will be taken advantage of,” he said.

Oregon swept every flight to stymie Monroe in a conference dual on May 4, in Oregon.

Zheng and Charlie Barnish at No. 1 singles survived Monroe’s Aaron Roidt and Chris Giasson 7-6 (7), 4-6, 6-2. At No. 2 doubles, Hake and Dieter defeated the Cheesemakers’ Ethan Towne and Wes Saunders 6-1, 6-2. Hakes and Wirtz at No. 3 doubles for the Panthers defeated Monroe’s Mitch Ferguson and Dante Giordano 6-1, 6-1.