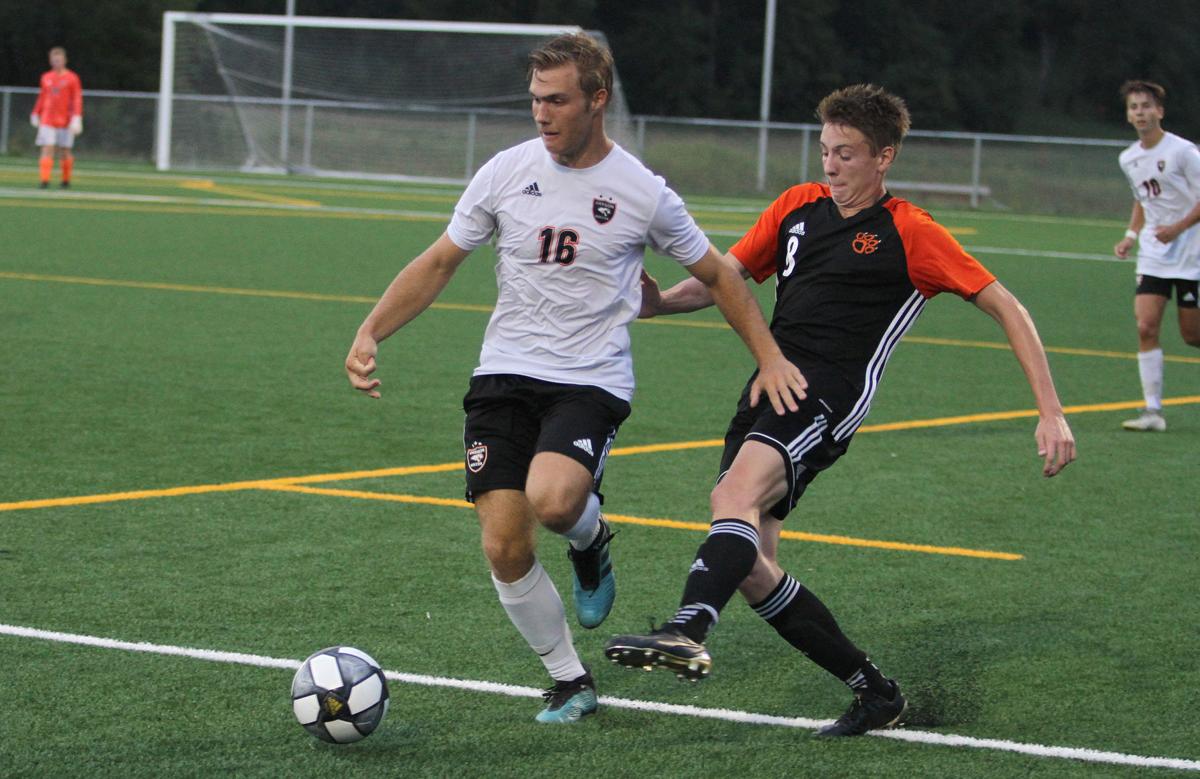 Oregon junior Daniel Compton (16) gets past Verona sophomore Jesse Ward in the Panthers’ 4-3 win over the Wildcats on Thursday, Aug. 26, in Verona. 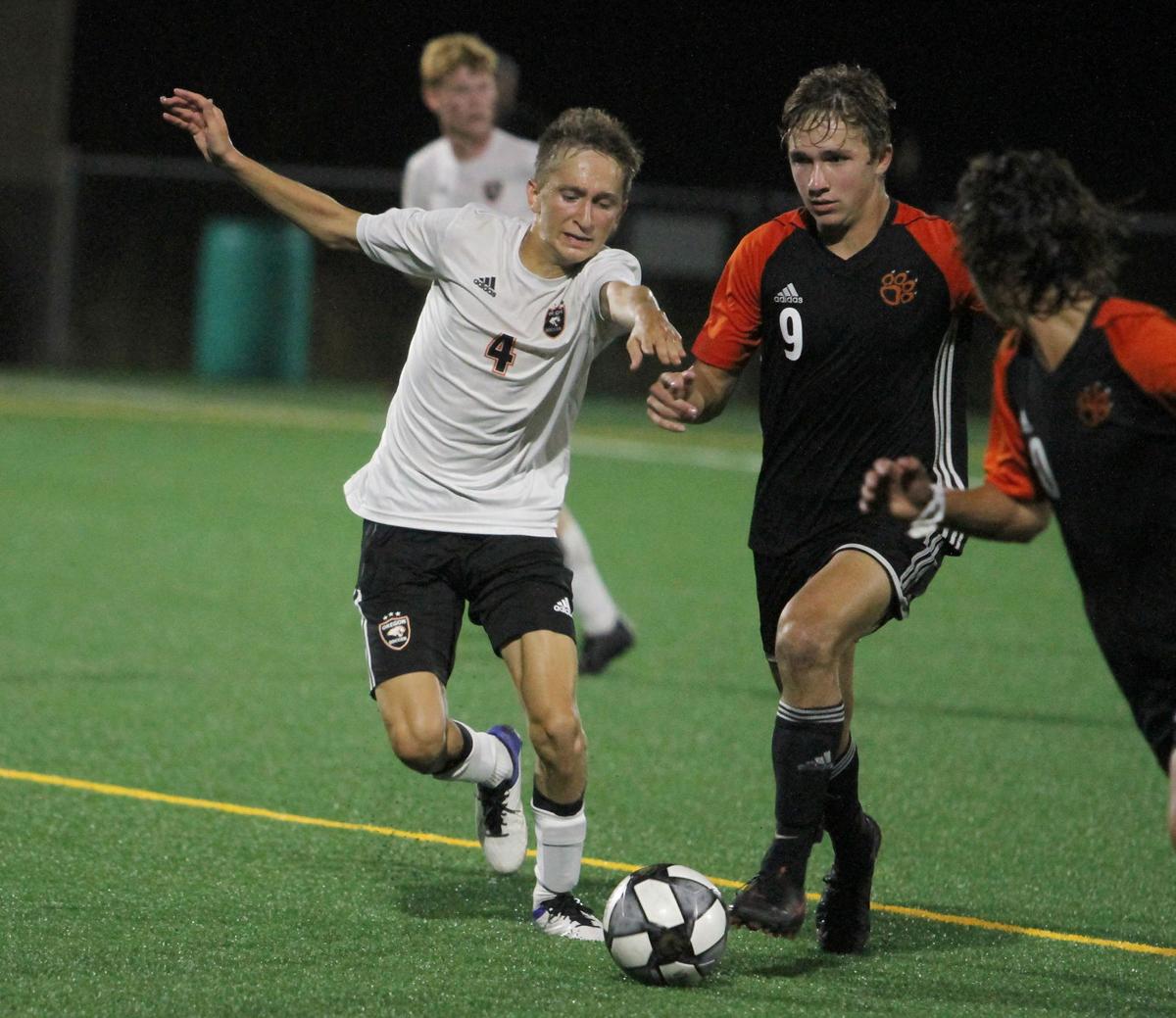 Oregon’s Colin Vandermause, left, looks to slow down Verona sophomore Connor Gage on an attack in the second half. 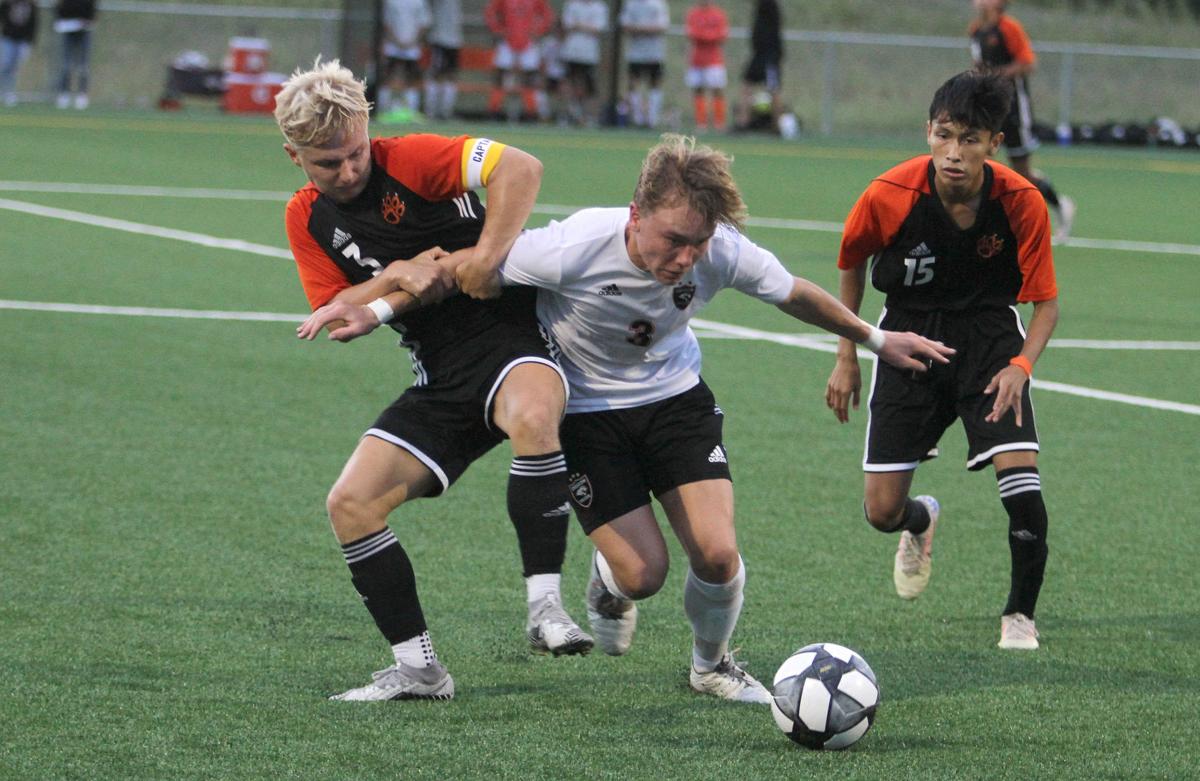 Oregon junior Daniel Compton (16) gets past Verona sophomore Jesse Ward in the Panthers’ 4-3 win over the Wildcats on Thursday, Aug. 26, in Verona.

Oregon’s Colin Vandermause, left, looks to slow down Verona sophomore Connor Gage on an attack in the second half.

Like many talented athletes, Oregon junior Noah Malcook uses the power of visualization before every game.

Malcook’s power of visualization before the season opener against Verona proved prophetic. Malcook scored the game-winning goal with 18 seconds left to propel the Panthers to a thrilling 4-3 win over Verona in a nonconference showdown on Thursday, Aug. 26, at the Verona Area High School Soccer Stadium.

“Before the game, I always picture the ball going in the back of the net and it actually happened in the last 18 seconds. It’s such a good feeling, especially when you look up and hear the crowd cheering it’s an ultimate rush,” Malcook said.

Both Oregon and Verona made a run to the sectional tournament last spring.

Oregon (2-0) used the momentum from the season-opening win as a springboard, knocking off another Big Eight Conference team — Middleton 3-0 on Saturday, Aug. 28, at Huntoon Field in Oregon.

After a victory in the final seconds against Verona, Oregon senior Eli Lehmann agreed with the coach’s decision to have some early season tests against other talented nonconference opponents.

“I think the coaches did this on purpose and I respect them for that,” Lehmann said. “I think we have all had a sense of urgency since the second we started tryouts. We have some good competition and that is a lot better than if we had some weaker teams because then we get a false sense of Oh, we are this hot stuff. When we go here and bring it back like that I think that puts us in the right direction moving forward.”

Oregon senior Alex Rodriguez scored one goal and had an assist to lead the Panthers to a nonconference win over the Cardinals Aug. 28, at Huntoon Field.

Oregon freshman Kellen Diercks scored a goal on an assist by Rodriguez at 9 minutes, 38 seconds. Oregon, which outshot Middleton 8-2, led 1-0 at the half.

Rodriguez scored in the 52nd minute on an assist from senior A.J. Couillard to give the Panthers a 2-0 lead. Junior Christian Wirtz capped the scoring with a goal in the 60th minute off an assist by junior Carter Uhlmann.

The Panthers rallied from a two-goal deficit in the final 15 minutes.

Lehmann had the game-tying goal off a rebound from junior Anthony Elert’s shot in the 75th minute. Rodriguez assisted on the goal.

“I have to give that one to Mason (Diercks) and Anthony,” Lehmann said. “I think Mason wanted it but then he realized it would be better for a left footer to kick it. Anthony was right there and took it. It bounced off and get tussled around and came right out to me. I was just thinking, ‘Please don’t miss.’”

Early on, it looked like Verona would run away with the victory as the Panthers got off to an inauspicious start. Verona had a goal wiped out by an offsides penalty in the seventh minute. Only five minutes later, Verona junior Alex Klimm had a shot ricochet off the top cross bar.

Klimm finally found the back of the net with a goal at 13:30 on an assist by junior Brian Vazquez Trejo. About four minutes later, the Panthers knocked in a goal while trying to clear a shot by Verona to give the Wildcats a 2-0 lead.

Coming back twice from a pair of two-goal deficits is a confidence-booster for the Panthers.

“I told the boys that the word that comes to my mind is resiliency,” Oregon coach Chris Mitchell said. “We just kind of put a working agreement and motto together a couple of days ago. We really brought that attitude that we agreed upon that is necessary for us to be successful, but it was that never quit mindset that won us the game.”

Kellen Diercks scored after a corner kick in the 23rd minute to cut Verona’s lead to 2-1 at the half.

In the 43rd minute, Verona sophomore Noah Hook scored off a pass just to the right of Oregon goalkeeper Casey Farrar and snuck in a goal inside the near post to give the Wildcats a 3-1 lead.

“We just knew we had to keep stepping up on defense and keep putting pressure on them,” Malcook said. “Defensively, we started to do that and moved the ball in the attacking one-third and things started opening up and we found a couple of goals. Our mindset was just to keep attacking.”

Oregon junior Mason Diercks scored in the 51st minute on an assist from Colin Vandermause to slice Verona’s lead to 3-2.

Mitchell said it’s hard to adjust to a style of play or strategy in soccer during the run of play.

“We never felt like we weren’t in it,” he said. “That was a big goal. We were most successful when we were patient with the ball.”

It was a contrasting style because Verona was most effective when they had a quick counter attack and the Panthers gave the ball up.

“It’s hard coming back from two goals twice,” Lehmann said. “I really have to give it to my teammates. No one questioned it for a second. It shows that we still have stuff to work on, but even when we make mistakes we are a good enough as a team and get it done at the end of the day.”

Verona had a slight edge in shots on goal 9-8 over Oregon. Farrar had a game-high eight saves.