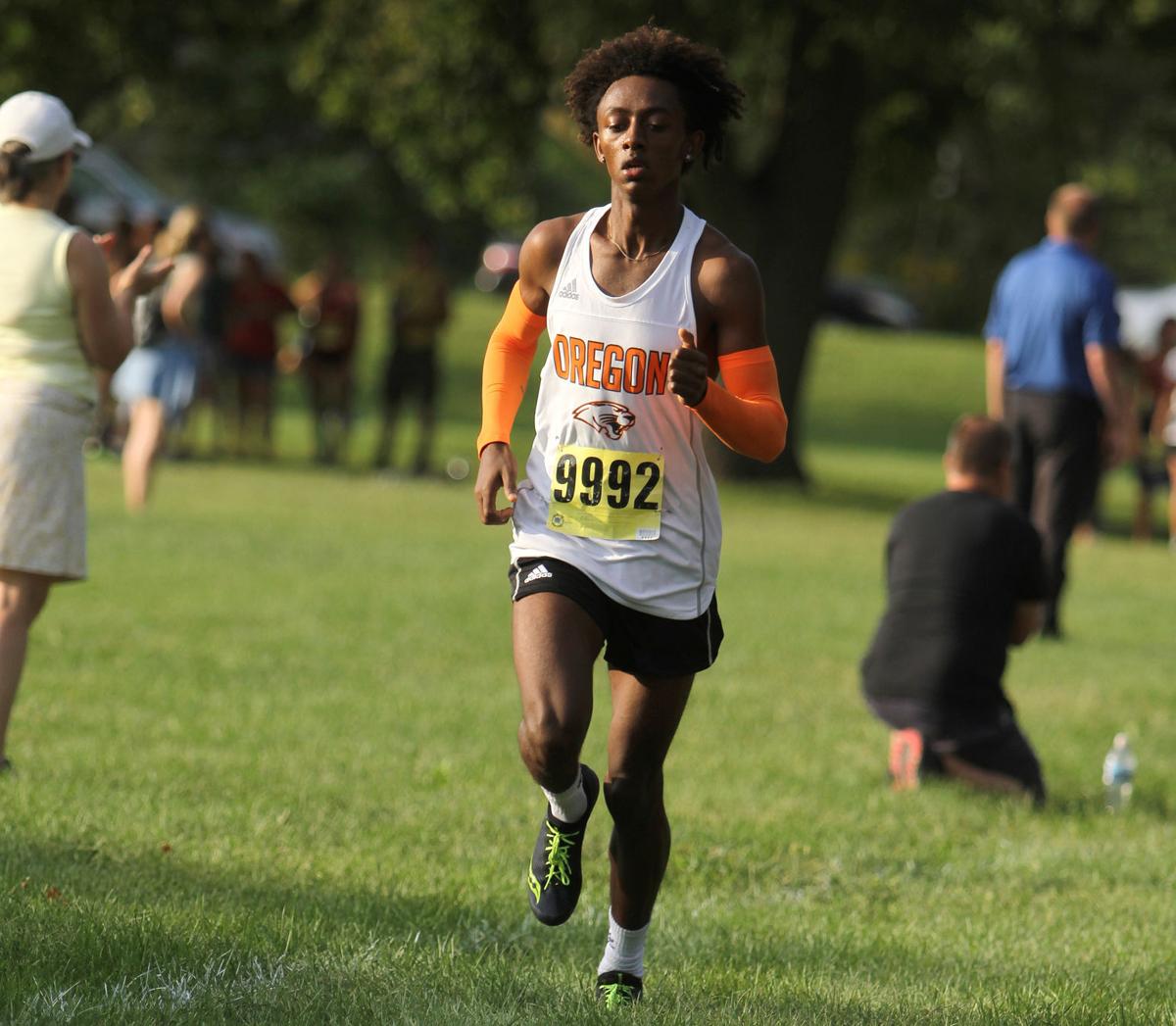 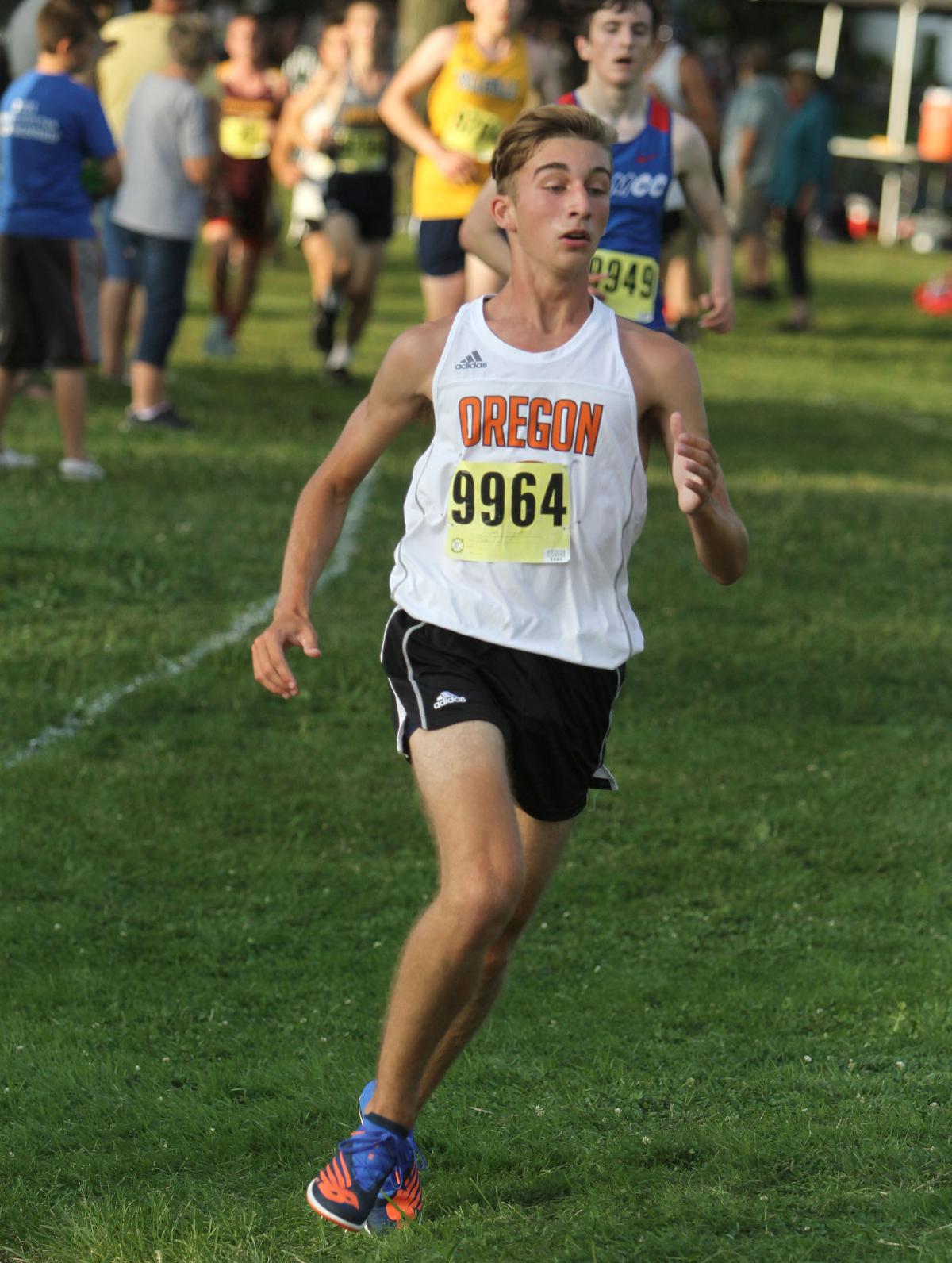 Oregon’s Wil Cram turns a corner in the second mile in the season-opening Bruess Invitational in Monroe. Cram took 17th and ran a lifetime-best time of 19:05.4.

Oregon’s Wil Cram turns a corner in the second mile in the season-opening Bruess Invitational in Monroe. Cram took 17th and ran a lifetime-best time of 19:05.4.

Yet, with his future plan to to run track and field in college, he decided to stay with cross country.

His decision paid off as Zelinski won the season-opening Bruess Invitational with a time of 16 minutes, 50.1 seconds on Monday, Aug. 30, at Twining Park in Monroe. He finished 21.5 seconds ahead of runner-up Joseph Stoddard of Mount Horeb.

“I didn’t know what I was going to do this season,” Zelisnki said. “I was deciding between soccer and cross country and I chose to do cross country because I’m already in good running shape so I kept going with this.”

“I definitely wanted to start sub-17 (minutes),” he said. “I still got it. I just had to race myself. It was just me against time.”

“The first meet is always a wild card,” Oregon coach Erik Haakenson said. “You have guys coming into the season that have trained a lot and put a lot of energy into their summer training usually do pretty well. Sometimes we have some mysteries and surprises.”

Cram had a personal-record time by more than one minute.

“He really put in a lot of miles in the summer,” Haakenson said of Cram.

The Panthers went through four hard training days leading up to the season opener, Zelisnki said.

“We had four hard days of training so I think we were ready for it as a team,” he said.

Zelinski said the race went as he planned.

“I either wanted to win the race or get top three,” he said. “In my head, I just went out there like I could win the race. I went out and did me and it turned out pretty good.”

Zelisnki said he wished there would have been more of a break between last spring’s cross country, track and field seasons and the start of his senior year of cross country.

“It kept me in shape,” he said. “I just had a few weeks off and then went back to training again. It definitely benefited me better than taking four weeks off.”

Haakenson was excited to see how strong Zelisnki looked running in his first race this season.

“It was probably challenging for him to run alone,” he said. “He will have someone to run against at Verona.”

Oregon junior Leo Schleck, who ran for Madison Edgewood last season, didn’t compete. Haakenson said he held Schleck out because he was a little sore, but he’s planning to run on Saturday at the Verona Invitational.

“The first couple weeks of practice have been a balance of challenging the guys who need to be challenged and getting new guys used to pacing,” he said. “You want every single kid from Yordi (Zelinski) on down to have a great experience. That’s what the parents expect too. If we can compete well it’s even more fun.”

The Oregon girls cross country team was scheduled to open the season at the Appleton Invitational at the Winagamie Golf Course on Friday, Aug. 27, but the meet was canceled after the course was flooded.

The Oregon girls will open the season on Saturday, Sept. 4, at the Verona Invitational.