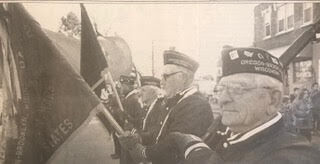 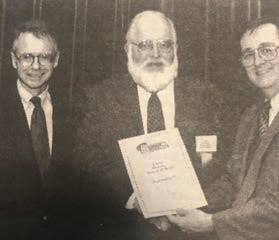 • Postmistress Nell McGill today announced that the portrait of Theodore Roosevelt will appear for the first time on a government security – on the $25 denomination of a new issue of Treasury Saving Certificate which will be placed on sale toward the end of the calendar year.

• Mr. and Mrs. Rasmus Peterson returned last Wednesday from an extended trip through Denmark, France, Belgium, Germany and other European countries. They report a very interesting and enjoyable trip.

• Mr. and Mrs. Erwin Kierstead and two children of Lake View Michigan are spending a few days at the Ira Allison and Hugh Henry homes in Dunn.

• Oregon will celebrate Armistice Day – With her traditional patriotism, public-spiritedness and cooperation, Oregon and vicinity will celebrate Armistice Day in the village for the fourth time, Friday afternoon, November 11. In addition to many other activities, and in compliance with Federal request; a two-minute zero period will be observed at 11 a.m. Every activity is requested to cease, everyone standing at attention for a period of two minutes in honor of the typifying burial of our unknown soldier dead. During this period, the village bells may toll, siren sound. (Let all take notice of this last and not be alarmed.)

• Mr. E. D. Main had the misfortune to break both bones of his right arm last Saturday. He was about to start for the Comstock funeral, but for some reason the starter on his car refused to work. He put on the crank to start it by hand, the motor kicked back with the result above stated.

• Brooklyn – Relatives in this village received a telegram that John Zook had died at Toulons, Illinois Monday. Mr. Zook was a Civil war veteran residing in this village many years until the death of his sister, Mrs. Piller, when he went to Illinois to live with a son. Mr. Zook will be buried in Sioux Falls, SD, beside his two wives.

• The Rutland Cemetery Association has purchased the U. B. Church in Rutland. This move was decided on at a meeting held recently.

• A letter of resignation written by Police Chief Joe Lockwood to the village was read at the Village board meeting. It is his intention to resign as of November 30. Lockwood has been in service with the Police Department since may of 1955, serving as chief most of those years. Officer Dick Sorenson is at present the assistant chief and served as acting chief during Lockwood’s illness this past summer. The matter was referred to the police commission for study and future action.

• In the early morning hours of last Friday or late Thursday night, thieves hit two Brooklyn business places. At Martinson Implement entry was gained through a north door. The thieves knocked the dial off a wall safe and escaped with some money and insurance policies. At the Anchor Club, the thieves removed about $1500 from the safe. Authorities feel it was the job of professionals. In order to create a distraction, Charlie Elmer’s ponies were turned loose and everyone’s attention was turned to aiding in their capture.

• Veterans Day was celebrated by the Oregon-Brooklyn VFW Post 10272.

• Two decades of resurrecting the authentic music of the Civil War era has earned Dan Woolpert of Oregon a State Historical Society of Wisconsin Local History Award of Merit.

• Ronald McDonald visits Brooklyn. After Student Council President Jon Riffle finished leading the assembled classes through a video quiz about recycling myths and statistics, Ronald McDonald came running into the gym wearing his oversized shoes. He performed magic tricks showing how to preserve water and to repair damaged items to be reused.

• Phillip Root Earns rank of Eagle Scout. The Eagle rank is the highest rank that can be earned from the Boy Scouts of America. Phil’s Eagle project consisted of a prairie restoration within the Bicentennial Park for the Oregon Township Parks System.

• The Harlem Wizards visited the Oregon gymnasium last week to take on a cast of all-star teachers and school staff. The game was part of a family fun night sponsored by the Oregon PTO.

• School board’s eyebrows raised by huge Fitchburg development: Monday night the board was introduced, via board member Doug Kornetzke, to a Fitchburg-sponsored mostly medium and high-density residential development that could add hundreds of students to the Oregon School District. At the Fitchburg Planning meeting, presentations were made about the 1,000 acre development Nine Springs Neighborhood development the city is hoping to create. That project is expected to add about 3200 dwelling units beginning in 5-7 years and for a period of 10-20 years.

• Oregon's restaurant scene is getting a makeover. The Custard Corner was reopened as Capital Creamery. Ming Moon moved to the former Oregon Family Restaurant location. The Loco Gringo changed its name and menu to the 4B Cafe.

• Street improvements, Senior Center services and Oregon Cable Access TV will all be scaled back next year in an austere 2012 preliminary budget adopted by the Village Board. Faced with decreased state aid, department heads were directed to limit their 2012 budgets to the same level as 2011.

• A local coalition that's aiming to change the state's “drinking culture” here in Oregon recently got some recognition from Dane County leaders. Oregon Cares – a group of about 25 local businesses, clergy, school, law enforcement and community members was recognized at “Friends of Joining Forces for Families Gathering”.

• Seven teams and 163 swimmers, ages 7 to 17 from surrounding areas made a splash at the Oregon Pool, competing in the Oregon Community Swim Club's fall hexathalon home meet. Teams competing were from McFarland, Stevens Point, Stoughton, Reedsburg, Waterloo and Waunakee, as well as Oregon.