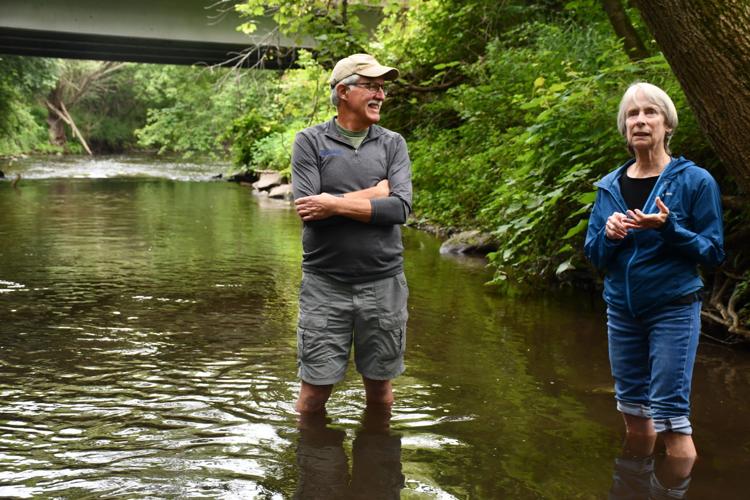 Lynne Diebel and Paul Garrison, both Friends of the Badfish Creek Watershed members, are on a mission to lower the level of E.Coli in the creek that is a popular destination for kayakers and canoers. 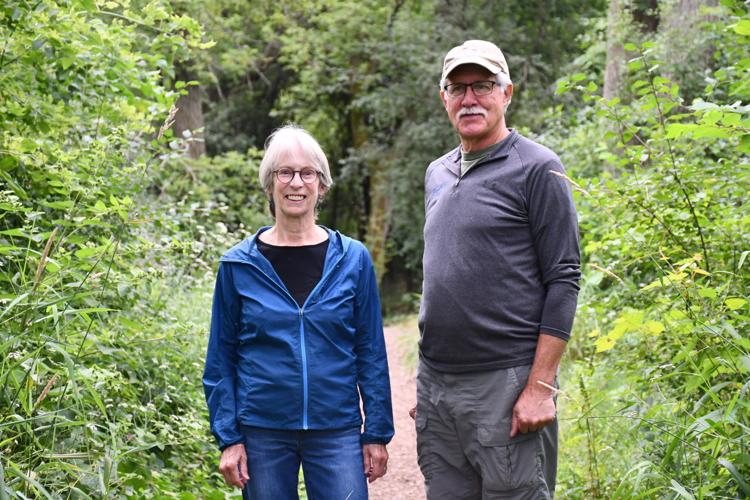 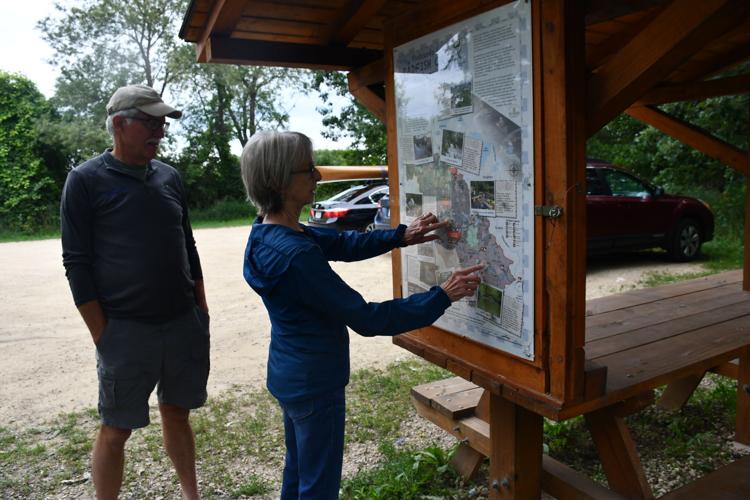 Lynne Diebel, Friends of the Badfish Creek Watershed unofficial director, points to a map near the Old Stage Road kayak landing. She has been with the Friends group for 14 years. 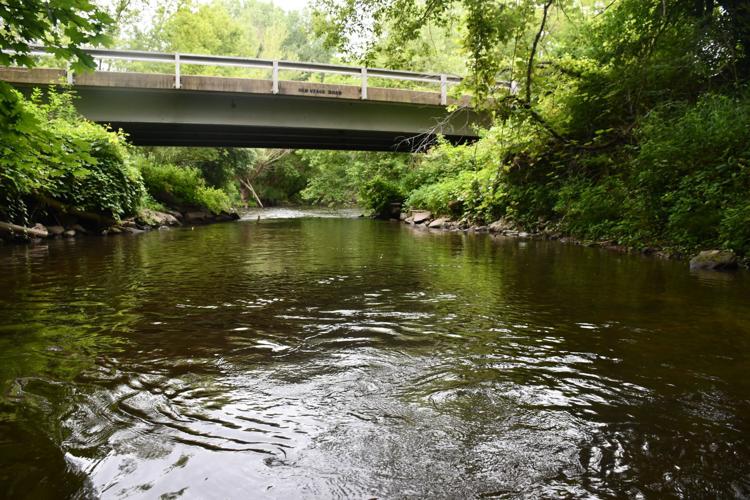 The Old Stage Road bridge that crosses over the Badfish Creek in the Town of Rutland. Near the bridge is a small parking lot and a launch point for kayakers and canoers. Stoughton High School students helped build the kayak launch. 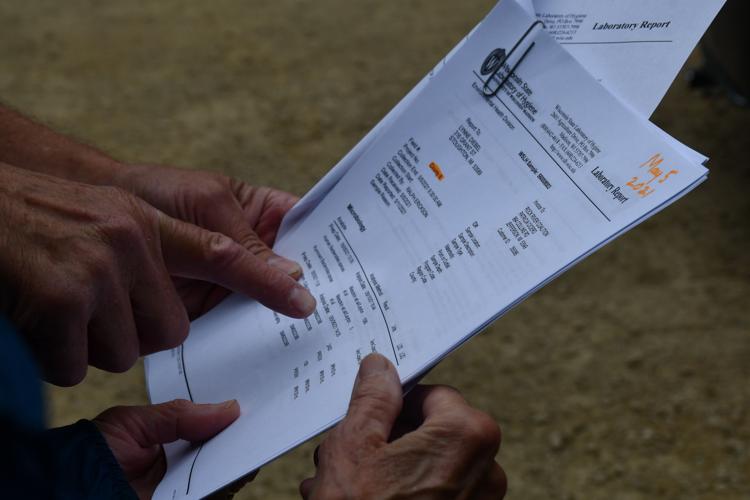 Results from the state Laboratory of Hygiene show that the levels of E.Coli in the Badfish Creek are high. The Friends of the Badfish Creek Watershed independently raised funds to show the source of the E.Coli and they discovered it is mostly human. 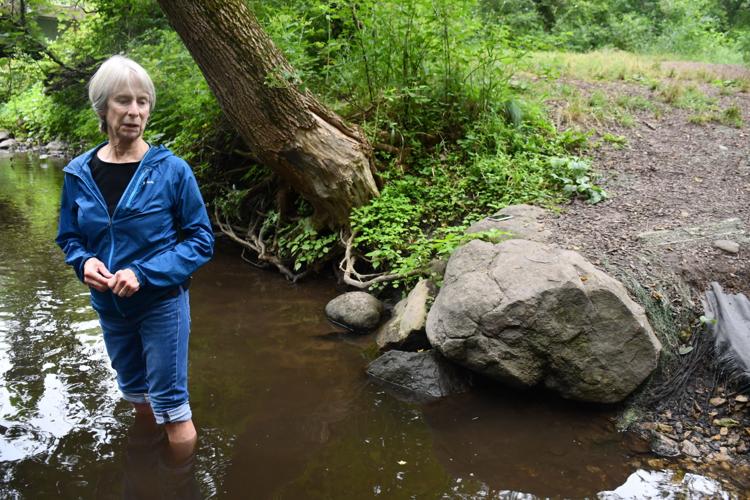 Lynne Diebel is the unofficial director of the Friends of the Badfish Creek Watershed and has been with the group for 14 years. She is also a board member of the River Alliance of Wisconsin. 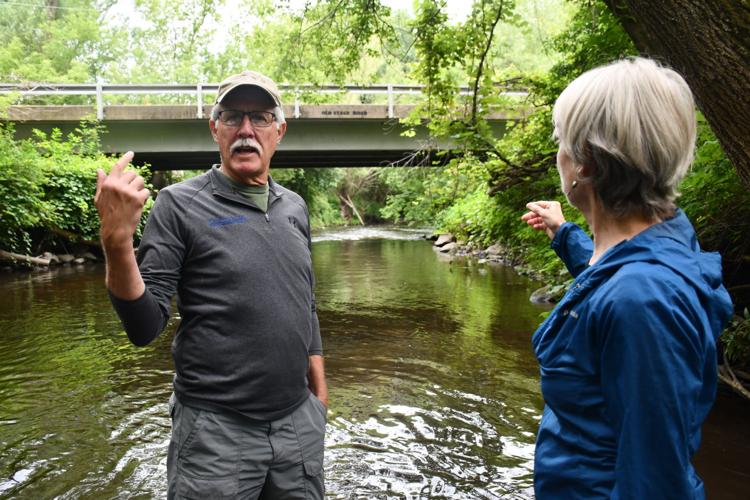 Paul Garrison joined the Friends of the Badfish Creek Watershed in 2019. He is an avid canoeist, backpacker and lives in Stoughton.

Lynne Diebel and Paul Garrison, both Friends of the Badfish Creek Watershed members, are on a mission to lower the level of E.Coli in the creek that is a popular destination for kayakers and canoers.

Lynne Diebel, Friends of the Badfish Creek Watershed unofficial director, points to a map near the Old Stage Road kayak landing. She has been with the Friends group for 14 years.

The Old Stage Road bridge that crosses over the Badfish Creek in the Town of Rutland. Near the bridge is a small parking lot and a launch point for kayakers and canoers. Stoughton High School students helped build the kayak launch.

Paul Garrison joined the Friends of the Badfish Creek Watershed in 2019. He is an avid canoeist, backpacker and lives in Stoughton.

The Friends of the Badfish Creek Watershed have been worried about an illness since November 2019, but rather than a virus, it’s caused by a bacteria – E. coli.

After finding E. coli levels in the creek that are eight times higher than safety recommendations from Public Health Madison and Dane County, the group has been on a mission to lower the presence of bacteria in the 22-mile-long creek.

By the end of the year, the Friends group plans to finish gathering two years of testing data from seven sites along the creek, which runs through the Village of Oregon, Town of Rutland and Cooksville, an unincorporated village just south of the Dane-Rock county border.

By showing consistent high levels of human-sourced E.Coli over time, the Friends hope municipalities will implement a more rigorous disinfection process at wastewater treatment plants so when the water goes from the facilities to the creek it has less bacteria.

Until then, the organization is starting with outreach. Its members, working with Public Health Madison and Dane County, put signs at some kayak launch sites warning recreational users of the high E. coli levels.

The group suspects the excess bacteria, some of which occurs naturally, is from local municipal wastewater treatment plants. But the cost to fix it would be high.

For the Village of Oregon, for instance, public works director Jeff Rau told the Observer the cost to implement an ultra violet disinfection process would be well over $1 million for the village.

And the DNR is not currently requiring that level of disinfection for the Village, due to its size and the classification of the stream where the effluent enters. The municipalities are in compliance with DNR standards and permits, for their wastewater treatment plants, Rau said.

To add another layer of complexity to disinfecting the stream, portions of the stream are classified as impaired, meaning there is a weak ecosystem and little recreational use and therefore has no cleanup plan.

Diebel and other Friends members argue, however, that the recreational use of the Badfish is high year-round for kayakers and canoeist. They have worked with a landowner to add a camera near the creek to monitor it’s usage.

From the reports the group gathered, the majority of samples from the Nov. 11, 2020, March 31, and May 5, 2021 collection had rates above the 1,000 counts per milliliters. At that level, Public Health Madison and Dane County generally requires closure of beaches for swimmers, county health department microbiologist Jennifer Lavender Braun, told the Observer in an email.

She said the levels of E. coli are not high enough to kill a swimmer, but if enough of the contaminated water is ingested, it can make someone ill.

Janis Baumann and Rick Wietersen from the environmental health department of Rock County Public Health said that the creek is a destination for kayaks and canoes. So there appears to be a mismatch on the creek’s classification, Wietersen said.

“Maybe the DNR and you know, even upper-level at the EPA level, I think they need to maybe re-evaluate how these permit criteria are set up,” Wietersen said.

Baumann, who has been collecting samples to send to the state for testing, added that the warm temperatures and the higher velocity flow of the creek make it a destination, even in the winter months in Dane and Rock County.

And 50% of that faster flow, which is important to kayakers, is caused by the effluent coming from Madison Metropolitan Sewerage District, Baumann said.

“It is really a love-hate battle,” Baumann said. “Without the discharge from Madison, I don’t know if you would see it being a really flowing stream.”

Diebel has spent the last 14 years furthering the mission of the group. She and other members have spent the past two years in particular sampling water along the creek.

She said that E. coli is a natural part of the water, especially in an agricultural area, however, these tests reveal the source is human.

The group learned of the E. coli source through six rounds of water sampling from seven sites along the creek, funded by a River Planning grant from the DNR, grants from the Stoughton Area Community Foundation, and donations from the Oregon People’s United Methodist Church. Through the higher quality, albeit more expensive microbial testing through the state Laboratory of Hygiene, results showed the E. coli is from human sources, rather than ruminant sources like animal agriculture or avian like birds.

Two sites along the Badfish Creek with the highest levels of E. coli bacteria cells were the output points of effluent discharge from the Madison Metropolitan Sewer District (6,630 count) and the Village of Oregon (8,010 count). The bacteria is measured in MPN/100 mL, which means the “most probable number” of viable cells per milliliter.

Rau said the levels of E. coli near the Village of Oregon could be high because the village doesn’t output directly into the stream, but into the Oregon Branch of the Badfish, a connecting stream near the Badfish’s official designation.

At the Stebbinsville testing site, south of Stoughton, the rates were considerably lower, 488, 303 and 310 respectively.

Wietersen and Diebel speculate that this site has lower E. coli levels because of its mixture with the Yahara River water and because the City of Stoughton disinfects wastewater that runs into the Yahara with the UV process each summer from May to September.

Wastewater as an ecosystem

The Village of Oregon renewed its wastewater permit in 2019, and the state DNR does not require it to use the UV or chlorine disinfection process Rau said. Instead, they use an aeration process, which is often used by municipalities that have a lower output and smaller populations. This type of treatment uses aerobic biodegradation, which uses air to break down the components, Rau explained. But he is not opposed to a UV radiation or chlorine disinfect system for the effluent.

“There will likely be a day when the Department of Natural Resources as part of our permit process or permitting renewal would come to the village and say, ‘We are now requiring you to disinfect,’” he said. “And at that time then we would have to, and the DNR would put us on a schedule and say, ‘You need to have disinfection in place by,’ and it could be five or 10 years in the future.”

The disinfection standards are in Wisconsin state code and are seasonal, Tim Ryan DNR Field Operations Director for the Division of Environmental Management said.

They are generally based on the recreational usage during the year and require the length and type of disinfection.

In the future, if the DNR required a change of a municipality’s permit, the village or city would be able to apply for grants and be put on a compliance schedule with milestone dates.

The permits give the DNR authority to extend the disinfection, as was done for MMSD.

Wietersen added that Oregon’s effluent output is significantly less than Madison’s and is hopeful that the extended disinfection process through MMSD will reduce the E.Coli numbers.

Madison Metropolitan Sewer District has been treating its wastewater with a UV process since 1986, but the UV treatment occurs from April 15 to Oct. 15.

After efforts from the Friends and other paddling advocates, the sewer district will start disinfecting as of March 1 and go through Nov. 30 starting in 2023, effectively adding three months to its cleaning schedule. MMSD supports the work, and is in partnership with the Friends group, according to a Rock River Reflections article from the fall of 2020.

The Friends group has received around $10,000 in grants and donations to conduct the tests from the state lab, which cost $995 each round. These identify both the amount of E. coli present and the source, including whether the DNA markers are from human or ruminant/animal sources.

Advocating for the creek

Diebel acknowledges the problem of high E.Coli levels is complex.

To make a case for the Badfish being considered a recreational stream by the state, the Friends worked with neighboring landowners to install a camera to monitor the use of the Badfish at Old Stage Road kayak launch.

“Once as (one of the Friends) got in at Old Stone (landing) there was a dad and a couple of kids, who were snorkeling in the creek,” Diebel said. People need to be warned, until we are able to get the levels down to a reasonably safe point.”

Diebel said people shouldn’t be afraid to kayak or canoe on the Badfish, she and other Friend members continue to do so but are conscious of washing their hands after a paddle, and ensuring not to ingest any water.

As an avid canoeist, a board member of the River Alliance of Wisconsin and someone who has paddled the Badfish for years, Diebel said she will continue to advocate for safe water ways.

“All Wisconsin waterways should be safe for recreational users,” she said

Last week, a group of around 15 community residents got to know their neighbors — and native plants — a little better during a walking tour by…

-The federal Centers for Disease Control and Prevention