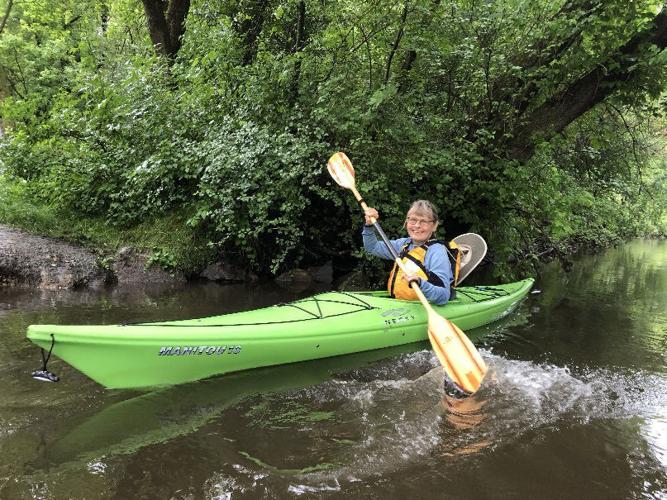 Kathy Trudell joined paddlers from Friends of Badfish Creek, the Madison Metropolitan Sewerage District and Natural Resources Foundation of Wisconsin on Friday, June 15 for a trip down the creek. The group left from a new landing along Old Stage Roadthat was built over the past year. 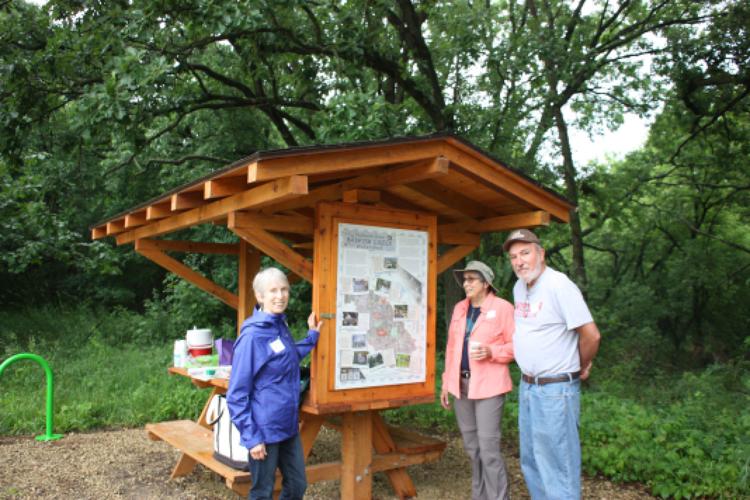 From left, Lynne Diebel, Sharon Beall and Jim Danky gather by a kiosk at a new boat landing for the Badfish Creek along Old Stage Road.

Kathy Trudell joined paddlers from Friends of Badfish Creek, the Madison Metropolitan Sewerage District and Natural Resources Foundation of Wisconsin on Friday, June 15 for a trip down the creek. The group left from a new landing along Old Stage Roadthat was built over the past year.

From left, Lynne Diebel, Sharon Beall and Jim Danky gather by a kiosk at a new boat landing for the Badfish Creek along Old Stage Road.

A few years ago, it was a densely wooded parcel along Old Stage Road about two miles northwest of Cooksville.

Today, it’s the site of a parking lot with a kiosk and picnic table, a snaking lime-green metal bicycle rack and a path lined with woodchips leading about 30 yards to a small boat landing on the Badfish Creek.

The Friends of Badfish Creek Watershed – a group of local volunteers dedicated to improving access to the creek – joined with more than a dozen people from partnering organizations last Friday to celebrate their accomplishments with a trip down the meandering stream.

Lynne Diebel, organizer of FBCW since its inception in 2006, said the group worked with the Wisconsin Department of Natural Resources, the Natural Resource Foundation of Wisconsin and the Madison Metropolitan Sewerage District to complete the parking lot and boat landing. The DNR paid for and built the kiosk and picnic table at FBCW’s urging, and the Friends used their own funds to build the boat landing.

Diebel also recruited 24 students from Amy Hermanson’s environmental studies class at Stoughton High School to help remove debris, clear the area and lay woodchips on the path to the water during a May 18 workday.

“It was a very different terrain before we started working on it,” Diebel explained. “There were trees in the way and a lot of ups and downs and shrubbery everywhere, and the landing was horribly muddy. It was terrible.”

The Friends group formed to increase public awareness of the creek, and until the boat landing and parking lot, the group primarily worked at removing invasive species from along the streambanks and getting signs installed to identify the creek at bridge crossings.

But the Friends’ biggest accomplishment has been creating a place to easily park and launch a boat, which took nearly three years to plan and accomplish.

In the beginning, Diebel said, the group simply wanted to clear a rough trail to the water.

“Then we thought, we have some money and we could pay to have the bank recontoured to make it easier to use,” she recalled. “An engineer laid out what he thought would be best for the streambank in terms of erosion.”

She explained how a Bobcat tractor was used to scoop out sediment near the riverbank to create a more solid base, and then the bank was lined with rocks. They then installed two layers of textile fabric, two layers of gravel and placed some large rocks along the bank to secure it.

The Friends came up with some other ideas for the parking lot and kiosk, including creating a poster, “Postcards from Badfish Creek Watershed,” that explains through text and graphics various facets of the waterway.

Local resident Jim Post, a graphic information systems specialist, and graphic designer Lauren Brown deserve credit for the poster, Diebel said. And blacksmith and artist Thayer Every, of Cooksville, donated the bike rack, which he designed and built.

Several years ago, Friends' member Jim Danky proposed installing a sign at each of 12 rural bridges that cross the Badfish as a way to raise awareness of the creek.

Last Friday, Diebel, Ralph Erickson of the Natural Resource Foundation of Wisconsin and Marty Griffin, property manager for the MMSD, addressed a group of about 20 before Erickson led a three-hour paddle trip down the creek to the Yahara River.

Griffin told the group the sewerage district has “really improved the water quality” of effluent that flows five miles through an underground pipe from the Nine Springs wastewater treatment plant into the creek.

He said MMSD is “now focusing on an adaptive management approach to improve the stream and habitat” by encouraging farmers to better control phosphorus and other agricultural runoff that degrades water quality.

Diebel, an author who’s written several guidebooks on canoeing in Wisconsin and Minnesota, said after “taking a breather,” the Friends are likely to help in that effort as well.

“The Badfish is a hidden gem,” she said. “It’s so beautiful and it’s right here. It’s a creek that has been underappreciated, I think.”

This story has been updated to clarify that artist Thayer Every donated the bike rack; the previous version said it had been purchased.